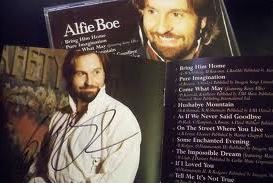 If you wanted to know who were the biggest actors on the West End stage in 2011, the names of Ramin Karimloo and Alfie Boe would most definitely crop up. Both have enjoyed huge success this year and have seen their fan following shoot as high as their rising stars. So what better way to celebrate than by releasing an album?

Alfie Boe is first on the agenda, with his second Decca album having just been released on 31st October 2011. The self-titled Alfie continues from the success of his 2010 album, Bring Him Home.

Since appearing in the O2 Les Miserables 25th Anniversary Concert as Jean Valjean last October, Boe has found a whole new set of fans as he crossed over from opera houses to West End theatres. He joined the company of Les Miserables at the Queen’s Theatre in June, reprising his role as Jean Valjean. His run ends in late November.

Boe’s second album follows suit from the first, with a large part of it comprised of classic musical theatre songs, including ‘Maria’ and ‘Music of the Night’. He also pays homage to Les Miserables with ‘Who Am I’ and a duet with original cast member Michael Ball (Marius) on ‘Empty Chairs at Empty Tables’. Boe also joins with rock singer Robert Plant for Tim Buckley’s ‘Song To The Siren’, as well as adding in the obligatory Christmas number.

Here is the full track list for Alfie by Alfie Boe:

I haven’t as yet bought Boe’s new album. I do own his 2010 album and remember being very excited to hear it – it received a lot of play time in my car for those journeys to London and back. While I still think he possesses a superb voice and rate (most) of the tracks chosen for this album, I am not as enthusiastic this time around. I suspect part of the problem lies in the level of exposure Boe has experienced this year. There is Alfie Boe merchandise galore and he has appeared on award ceremonies, early morning TV – even the shopping channel. Even though I’ve never gotten around to seeing him perform onstage at the Queen’s Theatre, I’ve heard him sing Bring Him Home so many times now that I feel I don’t need to.

There has been a massive capitalisation on Boe’s new-found popularity in the theatre world. I’m sure there are plenty of fans out there who are very grateful for this, but to be honest, I find it slightly off-putting.

I don’t intend to sound derogatory towards Alfie Boe, I think he is an extremely talented individual. It just concerns me that he is becoming commercial and overexposed, which could end up have a negative effect on the Boe name – just look at John Barrowman and James Corden for example; for a while, they were everywhere on TV and what happened? People got sick of seeing them and their popularity waned.

I’ve heard snippets of the new album and, as always, Boe’s vocals are tremendous. I expect fans will go crazy for it and that it will fly off the shelf. I just hope that – looking at the long term picture – Boe lays low for a little while once he exits from the Queen’s Theatre.

As is the way in Theatreland, when one door closes for someone, another opens for someone else. Boe steps out of Valjean’s boots for the last time on 26th November: ‘Enter Ramin Karimloo, stage left.’ Karimloo was approached to take over from Boe in the role of Valjean for the course of his three-month rest period and “just couldn’t turn it down”. He’ll play opposite close friend and fellow Sheytoons member, Hadley Fraser.

Karimloo has made a name for himself playing the Phantom in The Phantom of the Opera and originating the Phantom role for the musical sequel, Love Never Dies. He recently performed the role in the 25th Anniversary production of The Phantom of the Opera at the Royal Albert Hall, to great acclaim. Karimloo is considered to be the West End’s leading man of the moment – or perhaps he should be better known as the Man with the Midas touch as his name is pure gold right now. Everybody wants a piece of him, so the forthcoming album is certain to please a lot of people.

Karimloo released his debut album, Within The Six Square Inch in 2007, on his own label. It features duets with Hadley Fraser and Sophia Ragavelas and, while it has some unexpected song choices, it is still a good listen. The album is now sold out with no more copies planned for release however, so fans that are new to Karimloo’s voice will no doubt be glad that a second is on the way.

The self-titled Ramin is due for release by Sony on 9th January 2012. The power of Karimloo’s voice has grown and developed since his first album, so this one is certain to blow everyone away. It features covers of ‘Everything I Do’ and ‘Guiding Light’, but most of the tracks are original material, co-written by Karimloo. Those who have heard some of the Sheytoons numbers Karimloo has written will know that he is a skilled songwriter, adding depth, intensity and emotion to the music and lyrics. Pleased as I am that it isn’t just an album of covers, it wouldn’t be complete without his renditions of ‘Music Of The Night’ and ‘Til I Hear You Sing’ however.

Here is the full track list for Ramin by Ramin Karimloo:

Karimloo’s solo album is something that his fans have been waiting a long time for. Ramin Karimloo and Alfie Boe both have a massive following and their fans are sure to enjoy listening to their their dulcet tones in the comfort of their own home whenever they want. I do think that a little more thought could have gone into the titles. Self-titled albums are somewhat of a pet peeve of mine; the making of an album is a creative process, so surely that should extend to the album name too? Both albums are sure-fire hits though: two leading albums from two leading men.

Following its multiple West End runs, and continuing success at its home – The Other Palace, Heathers the Musical will embark on its highly … END_OF_DOCUMENT_TOKEN_TO_BE_REPLACED

After creating the “absorbing and provocative” Version 2.0 and the “eminently lovable” Letters, Kashyap Raja returns to London with his new play Earth … END_OF_DOCUMENT_TOKEN_TO_BE_REPLACED