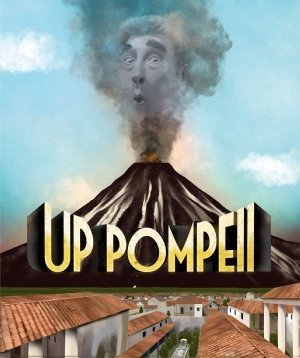 Multi-award-winning David Benson is to lead an all-star cast in a sparkling new audio recording of the Frankie Howerd comedy classic, ‘Up Pompeii’.

Revisiting the world of Frankie Howerd from his acclaimed one-man stage show, ‘To Be Frank’, David Benson will don the toga to play one of Frankie’s greatest comedy roles – Lurcio the ancient Roman slave.

Welcome to ancient Rome, where the steps of the Forum are peopled by nubile slave girls and a range of outrageous characters including Lurcio’s owner, Ludicrus Sextus the Senator, his wife Ammonia, his son Nausius and his daughter, Erotica. Lurcio attempts to deliver his prologue and begin proceedings before he’s quickly caught up in the myriad of sexual liaisons in all quarters of his master’s house. Why does Ludicrus not leave for the Senate meeting in Rome? Why does his wife return so quickly from the country? Who will take care of the escaped slave girl, Voluptua, and will Nausius’s love poetry improve? Whilst growing chaos ensues, an increasing rumbling is heard in the distance – what could that possibly be?

‘Up Pompeii’ was a huge TV hit for Frankie, with a loyal following of 12 million viewers. As Lurcio, Frankie constantly broke the fourth wall, taking the audience into his confidence with a non-stop barrage of double entendres and risqué gags, all of which go unheard by the other characters.

Now to mark the 50th anniversary of the first broadcast of ‘Up Pompeii’ on the BBC’s ‘Comedy Playhouse’, this new feature-length audio revival by Spiteful Puppet will be recorded at two special public performances at London’s Shaw Theatre on Saturday October 12, and released on CD and download via Amazon, iTunes and spitefulpuppet.com in late November.

‘Up Pompeii’ is adapted from the successful spin-off stage play by Miles Tredinnick, and was based on the original characters and BBC TV scripts devised by Talbot Rothwell (a scriptwriter for the ‘Carry On’ films) and Sid Colin. The audio adaptation was written by Barnaby Eaton-Jones, with Daniel McGachy and Iain McLaughlin; by kind permission of Tessa Le Bars Management.

The new recording features an all-star cast: Frazer Hines (‘Emmerdale’/’Dr Who’) as Ludicrus Sextus, Cleo Rocos (‘The Kenny Everett Show’/’Celebrity Big Brother’) as Suspenda, Tim Brooke-Taylor OBE (best known as one third of the TV comedy trio The Goodies and a panelist of ’I’m Sorry I Haven’t a Clue’ on BBC R4 for 40 years) as Captain Treacherus, Jack Lane (‘Dad’s Army Radio Hour’/’Wisdom of a Fool’) as Nausius, Madeline Smith (Hammer Horror star who appeared with Frankie Howerd in the films ‘Up Pompeii’ and ‘Up the Front’) as Ammonia, Camille Coduri (best known for playing Jackie Tyler in ‘Doctor Who’ from 2005-2010/ ‘Him & Her’) as Voluptua, Rosa Coduri (‘Lucky Man/Jekyll and Hyde’) as Erotica, Jilly Breeze (‘Da Vinci’s Demons’) as Senna, Ben Perkins (‘Hedda Gabler’, 2016) as Corneous and Barnaby Eaton-Jones (Producer/Director, his third revival after BBC Radio 4 Extra’s ‘I’m Sorry I’ll Read That Again… Again!’ and Audible’s ‘The Goodies’) as Kretinus.

Andrew Lloyd Webber’s The Phantom of the Opera has returned to its home, Her Majesty’s Theatre London. Experience the thrill of the West End’s most … END_OF_DOCUMENT_TOKEN_TO_BE_REPLACED

The full cast is announced today for the 40th Anniversary tour of Michael Frayn’s multi-award-winning farce, Noises Off, which will open at Theatre … END_OF_DOCUMENT_TOKEN_TO_BE_REPLACED

Adapted from Susan Hill’s classic book, The Woman in Black at the Fortune Theatre has been thrilling London audiences since 1989. In The Woman … END_OF_DOCUMENT_TOKEN_TO_BE_REPLACED

The producers of the multi-award-winning, critically acclaimed production of CABARET at the KIT KAT CLUB in London’s West End are thrilled to announce … END_OF_DOCUMENT_TOKEN_TO_BE_REPLACED