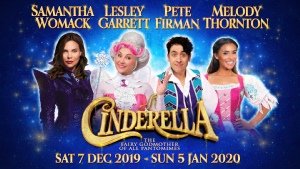 Leading the cast in the role of The Wicked Stepmother will be actress and singer Samantha Womack. Best-known for her role in EastEnders as the late Ronnie Mitchell, whose chilling on-screen departure was seen by over nine million television viewers she has appeared on numerous television dramas and comedies including Game On, Home Again and The Grimleys.

She has also featured in films including Up’n’Under and Lighthouse Hill establishing herself as one of the country’s most prolific actresses.

Her stage work includes the role of Sandy in Grease at the Dominion Theatre, Miss Adelaide in Guys and Dolls opposite Patrick Swayze, Nellie Forbush in the West End and UK tour of South Pacific and Morticia Addams in the critically-acclaimed UK tour of The Addams Family. Most recently Samantha has starred as Rachel Watson in the critically acclaimed stage adaption of Paula Hawkins’ best-selling novel The Girl on the Train which is currently on a second UK tour following a successful season at the Duke of York’s Theatre in the West End.

Joining her as The Fairy Godmother, and making her pantomime debut, will be award-winning soprano, musician, broadcaster and actress Lesley Garrett. A graduate of the Royal Academy of Music and the prestigious National Opera Studio, Lesley has performed in principal roles across the globe in various operas, appearing at the London Coliseum, Glyndebourne, with Opera North and as a principal soprano for English National Opera which saw her rise to fame. In 2006 she starred in Andrew Lloyd Webber’s revival of The Sound of Music at the London Palladium and joined the UK tour of Carousel before bringing it to the Savoy Theatre in London’s West End. In 2002 she was appointed a CBE for her services to music.

In addition to her stage work, Lesley was a contestant on the first series of the BBC’s Strictly Come Dancing, was a judge on Comic Relief does Fame Academy, had two series of her own and recorded various special concerts for the BBC, hosted and sang at the Classical BRIT Awards at the Royal Albert Hall and was a regular panellist on ITV’s Loose Women. As a solo recording artist Lesley has released fourteen albums, many of which received gold and silver status, and as a featured soloist on award-winning recordings including The Magic Flute, Così fan tutte and The Mikado.

Starring in the title role of Cinderella will be American singer-songwriter, dancer and television personality Melody Thornton. Having risen to global stardom as the youngest member of the successful pop group The Pussycat Dolls, Melody held a prominent vocal role in the group and can be heard on the band’s most successful hits. Melody and her fellow Dolls achieved worldwide success, with their music winning numerous awards, and released the Grammy Award nominated albums PCD and Doll Domination, which featured the hit singles Don’t Cha, Buttons, When I Grow Up and Jai Ho!. In her solo career Melody has collaborated with hit artists such as Cee Lo Green, Lil Wayne and LL Cool J.

In addition to her music, Melody featured on The Pussycat Dolls Show, Dancing With the Stars, and it’s UK counterpart Strictly Come Dancing, Dance Moms, the World Music Awards, Celebrity Island with Bear Grylls and Popstar to Operastar. Earlier this year Melody swapped her signature heels for skates and was a contestant on ITV’s hit show Dancing on Ice, where she finished in in fifth place.

His live performances have taken him all over the world and his one-man shows have entertained sell-out audiences for 10 years in a row at the Edinburgh Fringe and on several UK tours. He’s been invited to perform at Montreal’s prestigious Just For Laughs festival, Hollywood’s famous Magic Castle and London’s home of mystery, The Magic Circle. His other UK theatre productions include Champions of Magic, The All-Star Stand Up Tour and Sandi Toksvig’s Christmas Cracker. Cinderella marks Pete’s third foray into the world of pantomime for producers Qdos Entertainment, and his return to New Wimbledon Theatre having won rave reviews for his role as Wishee Washee opposite Paul Merton in last year’s successful production of Aladdin.

Cinderella will be once again be produced by Qdos Entertainment, the world’s biggest pantomime producer continuing their partnership with New Wimbledon Theatre for a third year, following the previous productions of Aladdin and Jack and the Beanstalk.

Producer Runaway Entertainment is delighted to announce that the critically acclaimed, smash hit, supernatural thriller 2:22 - A Ghost Story will … END_OF_DOCUMENT_TOKEN_TO_BE_REPLACED

LES MISÉRABLES at the Sondheim Theatre is delighted to announce it has extended booking until Sunday 5 March 2023, and a new performance schedule from … END_OF_DOCUMENT_TOKEN_TO_BE_REPLACED