Home » London Theatre News » Ambassadors Theatre: The Adventures of Pinocchio and 13 The Musical 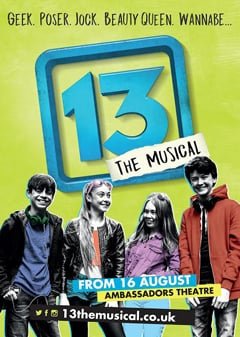 The Adventures of Pinocchio, with Music and Lyrics by Neil Bartram, Book by Brian Hill, directed by Bronagh Langan (Promises Promises, Southwark Playhouse) will run from Friday July 28 – Thursday 31 August.

13 The Musical, with Music and Lyrics by Tony Award-winning Jason Robert Brown, (Parade, The Last Five Years, Bridges of Madison County) and Book by Dan Elish and Robert Horn, directed and choreographed by Ewan Jones, will play Wednesday 16 August – Wednesday 23 August. 13 The Musical is a youth production presented by arrangement with Music Theatre International (Europe).

This season follows the success of previous BTA summer shows, The Secret Garden at the Ambassadors Theatre in 2016 and Annie Jr, which smashed box office records at the Arts Theatre in 2015. Those shows gave over 500 youngsters the chance to act for the first time in the West End. 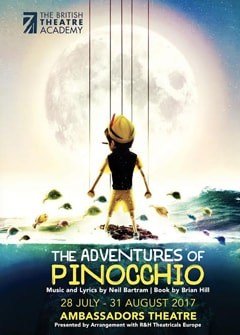 Producer Matthew Chandler of the BTA said: “The Color Purple in Concert at Cadogan Hall on Sunday was an unforgettable night for the audience and for our youngsters getting to perform alongside stars from the West End and Broadway. It is has been an incredible year for the BTA and to date all our productions and concerts have given 1,500 children the chance to perform on the West End stage. For our summer season, more than 2,000 young people auditioned for The Adventures of Pinocchio and over 1,000 teenagers for 13 The Musical. In total we have 17 teams of actors performing The Adventures of Pinocchio and 3 teams performing 13 The Musical.This is a fantastic opportunity for all the youngsters involved.”

The Adventures of Pinocchio
Written by the Broadway and Disney writing duo Neil Bartram and Brian Hill (The Story of My Life, Bedknobs and Broomsticks), this family musical is based on Carlo Collodi’s classic tale of a wooden puppet longing to be a real boy. Carved out of wood by the lonely toymaker Geppetto, Pinocchio tumbles from one disastrous situation to another in search of adventure—only to discover that, in the end, all he really needs is an unselfish heart and the love of his father. Based on Carlo Collodi’s classic tale, this family musical illuminates the bond between parents and children in a magical performance that is sure to enchant audiences of all ages!

13 The Musical
An original musical with music and lyrics by Tony Award-winning composer, Jason Robert Brown, (Parade, The Last Five Years, Bridges of Madison County) and book by Dan Elish and Robert Horn, it premiered on Broadway in 2008 and is the only Broadway musical ever with a cast and band entirely made of teenagers.

13 The Musical is an hilarious, coming-of-age musical about discovering that “cool” is sometimes where we least expect it. Geek. Poser. Jock. Beauty Queen. Wannabe. These are the labels that can last a lifetime. With an unforgettable rock score, 13 The Musical is a musical about fitting in – and standing out! Evan Goldman is plucked from his fast-paced, preteen New York City life and plopped into a sleepy Indiana town following his parents divorce. Surrounded by an array of simpleminded middle school students, he needs to establish his place in the popularity pecking order. Can he situate himself on a comfortable link of the food chain… or will he dangle at the end with the outcasts?!

Composed of a precocious cast, no character in 13 is older than the show’s title.The cast is comprised entirely of teenagers, but the stories that come to life here are ageless, the emotions they explore timeless, the laughter and the memories they provide priceless.

The British Theatre Academy is a unique performing arts programme that has inspired and nurtured the talent of thousands of young performers over the past 30 years! We believe that children should be trained as professionals by professionals. Our team maintains an established link with casting directors, music producers, and talent agents across the world. We are passionate about releasing the individual skill and flair of each student in all aspects of their chosen field. Our experienced creative team provide exceptional training and are dedicated in preparing and inspiring our students at the highest level. Last Summer the BTA brought The Secret Garden and Godspell into the West End where over 500 outstanding cast members wowed the audiences all summer long and performed alongside musical theatre stars Kerry Ellis, Ramin Karimlooo and George Maguire.

Andrew Lloyd Webber’s The Phantom of the Opera has returned to its home, Her Majesty’s Theatre London. Experience the thrill of the West End’s most … END_OF_DOCUMENT_TOKEN_TO_BE_REPLACED

The full cast is announced today for the 40th Anniversary tour of Michael Frayn’s multi-award-winning farce, Noises Off, which will open at Theatre … END_OF_DOCUMENT_TOKEN_TO_BE_REPLACED

Adapted from Susan Hill’s classic book, The Woman in Black at the Fortune Theatre has been thrilling London audiences since 1989. In The Woman … END_OF_DOCUMENT_TOKEN_TO_BE_REPLACED

The producers of the multi-award-winning, critically acclaimed production of CABARET at the KIT KAT CLUB in London’s West End are thrilled to announce … END_OF_DOCUMENT_TOKEN_TO_BE_REPLACED