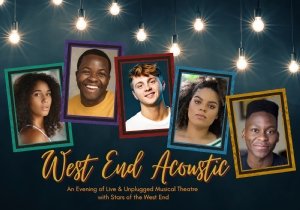 Interim Creative Director, Rachel Tackley today said “The last few months have highlighted to us how vital live performance is and at Riverside we really want to be able to share that experience with audiences just as soon as we are able. And what could be more thrilling than to be in the company of so many extraordinary artists. I can’t wait!”

Producers of New Frame Productions, James Quaife and Robin Rayner added “We are thrilled to be able to have the opportunity to continue to present live shows to live audiences working in collaboration with Riverside Studios. It’s both a privilege and an honour to work with so many talented people across all our shows this Christmas.”

For one night only stars of the West End, Maiya Quansah-Breed, Renée Lamb, Nicholas McLean, Tyrone Huntley and Sam Tutty are brought together for an unplugged celebration of all the most popular musicals, with musical direction by Chris Poon.

Sam Tutty’s credits include Dear Evan Hansen (Noël Coward Theatre – Olivier Award for Best Actor in a Musical) and Once on this Island (Southwark Playhouse).

Chris Poon’s theatre credits include Rent, The Astonishing Times of Timothy Cratchit (Hope Mill Theatre), Legend Trippers (The Other Palace), In the Heights (Bridewell Theatre), Timpson: The Musical (King’s Head Theatre) and Nice Work If You Can Get It (Upstairs at the Gatehouse).