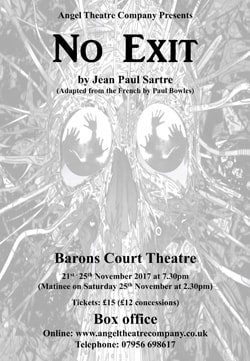 Angel Theatre Company present their next production, Jean-Paul Sartre’s No Exit, at Barons Court Theatre, 21st – 25th November at 7.30pm (with a matinee on Saturday 25th November at 2.30pm).

Angel Theatre Company is a professional organisation dedicated to producing London fringe theatre of the highest calibre. Their aim is to create work which is entertaining, challenging, engaging and thought-provoking. Although often performing in small venues, they aim to give their audiences the same quality of production as in any West End theatre, but for a fraction of the price! Angel Theatre Company achieves this through only casting professionally trained actors, having high production values and by working to the exacting standards of John Patterson, their Artistic Director.

The company boast an impressive history of producing successful theatre and have a catalogue of sell-out runs behind them. These have included Can’t Stand up for Falling Down, Eavesdropping, More Eavesdropping and, earlier this year, a five-star reviewed production of Kane’s 4:48 Psychosis. Their next venture, Sartre’s No Exit, is a classic yet timeless play. Two women and one man find themselves in a room. The door is locked and the windows are bricked up. There is no exit. Where are they? What has brought these strangers together? How long must they endure each other’s company? The answers are gradually revealed in this fascinating examination of human behaviour.

The production is directed by experienced actor and director, John Patterson. He said, “I was keen to follow the success of our last project with something completely different. No Exit is a gem of a play in which Sartre examines how we, as humans, have the power through our words and actions to, quite literally, destroy each other! This he does by setting the play in the most tormenting of locations, one from which there is no escape!” He added, “It’s a great move forward for the company to tackle a classic piece, as our previous productions have been quite
contemporary. My wonderfully talented cast and I are so excited to be working on this challenging and thought-provoking masterpiece of dramatic literature!”

News of this production is clearly generating great interest as the performances on 21st and 23rd November are already sold out! Further details, including how to book, can be found at
www.angeltheatrecompany.co.uk.

The Walt Disney Company UK and Ireland has today announced the full cast for the UK and Ireland tour of the landmark musical THE LION KING, including … END_OF_DOCUMENT_TOKEN_TO_BE_REPLACED

A young Jewish physicist and an activist poet meet at a party and fall in love. As society splinters around them, the couple’s struggle to survive … END_OF_DOCUMENT_TOKEN_TO_BE_REPLACED