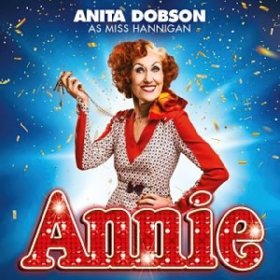 Michael Harrison and David Ian are delighted to announce full casting for the forthcoming UK tour of their smash hit production of the musical “ANNIE” opening at the Manchester Opera House on Saturday 2 February 2019. Joining the previously announced Anita Dobson and Craig Revel Horwood who both star as ‘Miss Hannigan’ (Anita will play the role from 2 February – 27 April 2019 and Craig will play the role from 30 April – 6 July 2019) will be Alex Bourne as ‘Oliver Warbucks’, Richard Meek as ‘Rooster’, Jenny Gayner as ‘Lily’ and Carolyn Maitland as ‘Grace Farrell’. The title role of ‘Annie’ is shared by Faye Katsande, Ava Smith and Freya Yates. They are joined by three teams of young performers who play the girls in Miss Hannigan’s orphanage.

This production recently ran for an extended season in the West End following a sell-out tour of the UK and Ireland in 2015/16 as well as a recent sell-out season in Toronto.

As Angie Watts in EastEnders, Anita Dobson created one of the most popular characters in television winning numerous awards. Her West End theatre credits include ‘Madame Morrible’ in “Wicked”, ‘Mama Morton’ in “Chicago”, ‘Mrs Meers’ in “Thoroughly Modern Mille”, ‘Chris’ in “Calendar Girls”, ‘Joan Crawford’ in “Bette and Joan” and ‘Nancy’ in “Frozen” at the National Theatre for which she was nominated for an Olivier, Evening Standard and London Critics Award. Her film credits include “London Road”.

Craig Revel Horwood is probably best known as a judge on all 16 series of BBC1’s “Strictly Come Dancing”. He returns to the part of ‘Miss Hannigan’ having played the role to critical acclaim in this production in both the West End and on the 2015/16 UK tour. His other West End Theatre credits include ‘Munkustrap’ in “Cats”, “Miss Saigon” at the Theatre Royal, Drury Lane and ‘Harry’ in “Crazy for You” at the Prince Edward Theatre. Craig directed and choreographed the recent tour of “Sister Act The Musical” as well as the “Strictly Come Dancing Live” tour for the past six years. He also choreographed the film “Paddington 2”.

Alex Bourne reprises his performance as ‘Oliver Warbucks’ after playing the role in this production of “Annie” in the West End, Toronto and on the 2015/16 tour. His many other West End credits include ‘Danny’ in “Grease”, ‘The Beast’ in “Beauty and the Beast”, ‘Billy Flynn’ in “Chicago”, ‘Khashoggi’ in “We Will Rock You” and ‘Fred/Petruchio’ in “Kiss Me, Kate” for which he received an Olivier Award nomination for Best Actor in a Musical. His other credits include ‘Daryl Van Horne’ in “The Witches of Eastwick” and the Watermill Theatre, for which he received a TMA nomination for Best Actor, ‘Sam Michael’ in the national tour of “Mamma Mia!” and ‘Lex Hogan’ in “Eugenius!” at the Other Palace.

Richard Meek’s many credits include ‘Trevor Graydon’ in “Thoroughly Modern Millie”, ‘Brad’, ‘Eddie’ and ‘Dr Scott’ in “The Rocky Horror Show” and ‘Sir Galahad’ in “Spamalot”, all on national tour. He has also appeared as ‘Leo Bloom’ in the international tour of “The Producers” as well as ‘Dustin’ and ‘Greaseball’ in the 25th anniversary cast of “Starlight Express” in Bochum, Germany.

Jenny Gayner’s West End credits include ‘Miss Wilson’ in the original cast of “The Girls” at the Phoenix Theatre, ‘Hunyak’ in “Chicago” at the Adelphi, Cambridge and Garrick theatres and “Spamalot” at the Palace Theatre. Jenny has also appeared as ‘Lina Lamont’ in “Singin’ in the Rain” and ‘Brooke Windham’ in “Legally Blonde”, both at Kilworth House.

Carolyn Maitland reprises her performance as ‘Grace Farrell’ after playing the role in this production of “Annie” in Toronto. Her West End credits include ‘Ellen’ in “Miss Saigon” at the Prince Edward Theatre, ‘Marian’ in “The Woman in White” at the Charing Cross Theatre and “Groundhog Day” and “Kiss Me, Kate”, both at the Old Vic. Her other credits include ‘Molly’ in the national tour of “Ghost” and ‘Kathy Seldon’ in Singin’ in the Rain at Kilworth House.

Set in 1930s New York during The Great Depression, brave young Annie is forced to live a life of misery and torment at Miss Hannigan’s orphanage. Determined to find her real parents, her luck changes when she is chosen to spend Christmas at the residence of famous billionaire, Oliver Warbucks. Spiteful Miss Hannigan has other ideas and hatches a plan to spoil Annie’s search…

With its award-winning book and score, this stunning new production includes the unforgettable songs ‘It’s the Hard Knock Life’, ‘Easy Street’, ‘I Don’t Need Anything But You’ and ‘Tomorrow’.

“ANNIE” has Music by Charles Strouse, Lyrics by Martin Charnin and a Book by Thomas Meehan. “ANNIE” is directed by Nikolai Foster with set and costume design by Colin Richmond, choreography by Nick Winston, lighting by Ben Cracknell and sound design by Richard Brooker. “ANNIE” is produced by Michael Harrison and David Ian.

'Look anyone will tell you, I’m a pretty straight sort of guy.' Tony Blair A reckless reappraisal of the life of former Ugly Rumours front man and … END_OF_DOCUMENT_TOKEN_TO_BE_REPLACED

Michael Harrison and the Really Useful Group are thrilled to announce that The Wizard of Oz, the musical based on the iconic story by L. Frank Baum, … END_OF_DOCUMENT_TOKEN_TO_BE_REPLACED

Following major demand for tickets, the Queen of comedy Dawn French has announced a host of new UK tour dates for her critically acclaimed live … END_OF_DOCUMENT_TOKEN_TO_BE_REPLACED