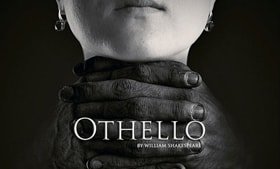 In addition to their adaptation of Twelfth Night, the other production currently being put on by the Arrows & Traps team, Othello is being performed alternatively at Upstairs at The Gatehouse. The classic Shakespearean tragedy makes for a stark contrast to the other production, which I have also had the pleasure of viewing.

The play stars Spencer Lee Osborne in the title role, supported by Pippa Caddick (Desdemona) and Pearce Sampson (Iago). All are excellent, though particular commendation went for me to Caddick, who manages to imbue the often ineffectual Desdemona with subtle strength. Desdemona is a problematic character for me, being often presented very much as a surface character of fairness and womanhood, without any of the complexities of any of the other key male characters.

This is the third Shakespeare adaptation I have seen from the Arrows and Traps team, and again, I was not disappointed. Whilst Othello does not lend itself quite as well to making use of all the talented actresses in the group, the production is as slick and solidly performed as I have come to expect. Sampson really was a surprise for me; an opportunity to make far more of his stage time than afforded in previous productions in which I have seen him. The talent in this young team is undeniable.

There is a sequence of movement accompanied by music was for some members of the audience a little hit and miss; for me, it worked exceedingly well, a clever use of music and staging, to good emotional effect. I immediately wanted to see this portion again, feeling it to be one of the best integrations of music of any of the Arrows and Traps productions I have seen to date.

My only criticism of the staging was that it did lend itself better to the production of Twelfth Night, the other half of the billing; though there are moments in which the action is juxtaposed across sections of the stage very well, this felt more natural in Twelfth Night. Regardless, the simplicity and modernity of the staging remained as effective as it did for Twelfth Night, complemented by a clever use of handheld lighting for moments of mystery and confusion.

In all, I continue to be impressed by the work that comes from this group. I urge anyone who feels like a solid evening of entertainment to support these productions, as this is a rendition of Othello which is both fresh and convincing.

“O god that men should put an enemy in their mouths to steal away their brains”
Othello is incredibly talented and successful. But he remains an outsider in his city, subject to racism, jealousy and suspicion. Only Desdemona treats him with respect and kindness: they fall passionately in love. His best friend, Iago, watches Othello’s life flourish with unbearable jealousy and plots to destroy him completely.
As Othello’s world disintegrates into chaos, consumed by a poisonous cocktail of jealousy and rage, he turns on the only person in the world who wants to save him.

The producers and creative team are delighted to announce a new booking period for the West End production of the Tony, Grammy and Olivier … END_OF_DOCUMENT_TOKEN_TO_BE_REPLACED

Having had to shut down the production of Bruce Norris’ seminal play Clybourne Park at final dress rehearsal in March 2020, Trish Wadley Productions … END_OF_DOCUMENT_TOKEN_TO_BE_REPLACED

9 to 5 The Musical Celebrates DOLLY PARTON Being Awarded 47 New Gold and Platinum Certifications. As the UK Tour recommences Dolly Parton’s 9 to 5 … END_OF_DOCUMENT_TOKEN_TO_BE_REPLACED