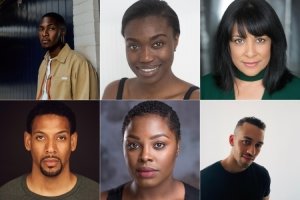 In September, the School of Acting will welcome Steven Kavuma as Foundation Acting Course Leader and Gabrielle Nimo as Head of Movement.

They will join Kim Vithana, Head of Film, TV and Audio and Joint Head of Third Year BA Acting, and Justin Pierre, Acting Tutor for BA Acting and Foundation as well as Equality, Inclusivity and Diversity Co-ordinator for the School of Acting.

Nadine Higgin will be welcomed as Equality, Inclusivity and Diversity Co-ordinator for the School of Musical Theatre and Head of 2nd Year, alongside Adam Wallis who will be joining as Senior Voice Tutor.

Kim Vithana joined ArtsEd in November 2019, and her expertise is already apparent in exciting developments in ArtsEd’s screen acting offer.

Her appointment as Head of Film & TV at ArtsEd has only strengthened her passion for screen acting. She said: “ArtsEd offers the best training and preparation to actors who want to be industry-ready. Stage and Screen go hand in hand here and this makes me hugely excited about working with this innovative team. ArtsEd is simply the future of credible and relevant training.”

Steven Kavuma is a writer and theatre director who studied Applied Theatre at the Royal Central School of Speech and Drama. He is the co-founder and co-director of The Diversity School Initiative; a campaign initiative set up to address under-representation and diversity in UK drama schools.

Steven was the curator of This is Black, a festival designed to support and celebrate Black artists’ work on a fringe level. His directing credits include: An Octoroon (Radio Remix) by Branden Jacobs-Jenkins at UAL, Blue/Orange by Joe Penhall at ALRA, Teleportation by Ronkẹ Adékoluẹjo at Bunker Theatre, and BOYS, devised by the Dalston Eastern Curve Garden company.

Steven featured in The Stage 100 list (2020) as one of the most influential people in theatre.
On his appointment, Steven said: “I am beyond excited to join the ArtsEd team. I am looking forward to examining what we train, presenting new methods of training, and equipping the next generation of artists with what they need. Julie [Spencer] has made a tremendous impact at ArtsEd and I am thrilled to be a part of that.”

On her appointment to Head of Movement at ArtsEd, Gabrielle said: “I am absolutely delighted to take on the role as Head of Movement for the next academic year. ArtsEd deliver high-quality training for their talented students, led by excellent staff and I look forward to building on such great work.”

A graduate of Rose Bruford College, Justin’s theatre credits include: Othello, directed by Sam Walters, Tybalt in Romeo & Juliet, and Generations of the Dead at the Young Vic.

Adam Wallis works at the forefront of the voice education industry, having previously taught at The BRIT School, Central School of Speech & Drama, Westminster and St Mary’s. He has also worked in TV, radio and theatre as both a performer and in vocal support roles. He completed his MFA in Voice Studies from The Royal Central School of Speech and Drama.

Nadine Higgin trained at ArtsEd on the BA Musical Theatre course, graduating in 2008. Her West End credits include: High School Musical, Hairspray, Little Shop of Horrors, The Lion King, and the original West End casts of Legally Blonde, and The Book of Mormon. She played the role of Cliff in Alan Bennett’s new play Allelujah! at The Bridge Theatre, and the roles of Peter Quince, Egeus and Cobweb in The Globe’s 2019 production of A Midsummer Night’s Dream.

On her return to ArtsEd as a member of staff, she said: “I am very honoured to be back in a building that I hold so close to my heart, taking on this role. I’m looking forward to getting to know my students, share my knowledge, but also learn from them. I’m so excited to get started!”

Chris Hocking, ArtsEd Principal said: “I am delighted to welcome these talented new members of staff to ArtsEd. We look forward to embracing the contributions that they will all make to our commitment to offer training that is dynamic, creative and inclusive.”