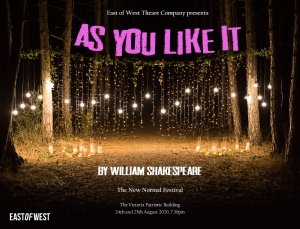 As You Like It was originally set to be performed at the London College of Music as the final year showcase for the graduating BA (Hons) Acting and BA (Hons) Actor Musicianship students of 2020, but Covid-19 prevented that.

As You Like It will be revived at The New Normal Festival by the production’s director, Rachel Heyburn (Pussy Riot, Banksy’s Dismaland), who is determined to give these extremely talented graduating students the opportunity to perform that they all so richly deserve.

The New Normal Festival has been organised by Sean Turner, Associate Director on The Play That Goes Wrong (West-End, International and Tour). It runs throughout August and its programme includes shows that had been destined for Edinburgh, as well as productions from the 2020 Vault Festival, which were cut short when the UK went into lockdown in March.

“We that are true loves run into strange capers”

When banished from court by Duke Frederick, royal cousins Rosalind and Celia venture into the Forest of Arden in disguise with their clown, Touchstone. Now dressed as a boy called Ganymede, Rosalind meets her love Orlando, encouraging him to woo her as if she were Rosalind under the rouse that it will “cure” him of his feelings.

As You Like It is Shakespeare’s most famous pastoral comedy, celebrating individuality and finding your true self. In the Forest of Arden – where time has no meaning and the decades merge – we meet lovers, a merry band of lords and tricksters with hilarious consequences and a jubilant outcome where the discovery of freedom and love reign.

Director, Rachel Heyburn:
Rachel directed the world-famous activist collective, Pussy Riot in Refugees In at the closing evening of Banksy’s Dismaland. The Pussy Riot performance was featured in Vice, Rolling Stone, The Guardian, The Sunday Times and Time. Rachel has also directed The Slave by Amiri Baraka (Tristan Bates Theatre) and was the Assistant Director on Dublin Carol (The Donmar at Trafalgar Studios Season).