You are here: Home / London Theatre News / Austentatious announce extension of run at the Fortune Theatre 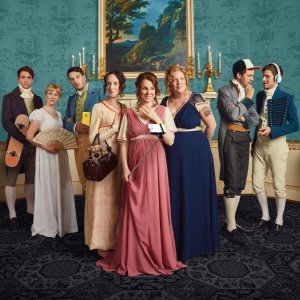 Due to popular demand multi-award-winning improvised comedy troupe Austentatious are delighted to announce an extension of their existing residency at the Fortune Theatre. The show will continue to thrill and entertain London audiences across 8 nights at the Fortune Theatre in London, beginning on 18th November 2019 and concluding on 16th December 2019. Tickets on sale from www.atgtickets.com.

Austentatious is an improvised comedy play starring a cast of the country’s quickest comic performers. Every single show the cast conjures up a brand new ‘lost’ Jane Austen novel based on nothing more than a title suggested by the audience. The group have established themselves as one of the UK’s most popular live acts, with seven sell-out runs at the Edinburgh Fringe under their belt, a monthly West End residency in 2018, and a BBC Radio 4 special to mark the bicentenary of Austen’s death.

Returning for a limited season in London after their run at the Edinburgh Festival Fringe and hit national tour, Austentatious are back and ready to ring in the festive season, spreading cheer and love to all who joins them! The winter run also sees the return of popular pre-show carol singers – what better way to get into the Christmas spirit, making it the perfect end to a great day out for the whole family!

Austentatious said: “We are beyond delighted to be donning our warmest bonnets and preparing ourselves for Winter festivities, back at the delightful Fortune Theatre. Our cheeks are rosy, our hearts are glad, and we are most ready to bring Regency silliness back to the West End.”

Holly Reiss, Executive Producer for Underbelly Productions said: “It’s a joy to be bringing Austentatious back to the West End for what is fast becoming a favourite winter tradition for comedy fans. We’re thrilled to be returning to the Fortune Theatre for eight more hilarious evenings of Austen-inspired improv!”

Previous ‘lost’ masterpieces have included Dirty Darcying, The Bodice Guard, Hold Me Closer Tiny Darcy and We Will Frock You, and no two shows are ever the same. Performed in full Regency costume with live musical accompaniment, this is a treat guaranteed to delight Austen novices, die-hard fans as well as a host of brand-new audiences. Expect witty heroines, dashing gents and preposterous plots. Swooning guaranteed!

Austentatious Loyalty Card – see the show four times and your fifth time is free! Available to pick up at the Fortune Theatre Box Office. For full terms and conditions see here.