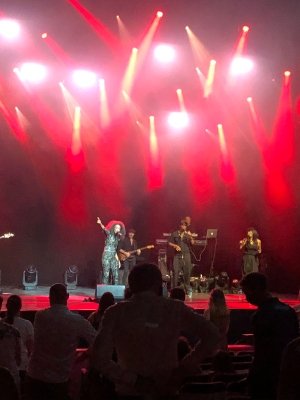 There is some hope. Although West End shows have largely confirmed they will not return until some point in 2021, this concert at the London Palladium (together with a few other pilots) showed how live entertainment in an indoor theatre can be done with social distancing measures in place. It is, of course, not without its challenges. For one thing, even with a significantly reduced audience, relative to its capacity, the queue to get in was considerably longer than I’ve ever seen it, even with a timed entry (my tickets stated 1:30pm to 1:45pm).

I had no idea what a member of the Palladium staff was shouting even from a few metres away, which is what happens, I suppose, when one is shouting whilst wearing a mask. It transpires she was holding a sign with a QR code, which, when picked up by a smartphone’s camera function, takes the audience member to an online form. I gave my name, mobile number and the time and date of the performance, details to be used – if necessary – by the NHS Test and Trace system.

More staff members are on hand the closer one gets to the front of the queue, and there are, as ever at the Palladium, separate entrances for different seating levels. If necessary, you are pulled out of the main queue and guided to the right entrance. There are then the usual bag checks just before the front doors, after which patrons use the provided hand sanitiser, put on a face covering and enter the building. My fellow theatregoer’s homemade face-covering didn’t quite meet the standards required: no matter, as single-use face masks were available, free of charge. A camera takes a photo – but it’s not one for Instagram – this is a thermal imaging camera that takes a temperature check. Only at this point do you show a member of staff your tickets and make your way in.

If this is the new normal, it will take some getting used to. Your mask must be on at all times. Even if you’ve purchased a drink, you must wear your mask between sips. This raises a discussion about how effective a face mask is if it is repeatedly adjusted (put simply, if you’re adjusting your mask, you might touch your face, which is not ideal), but that is the rule. The interval was half an hour – though with much to discuss, it felt shorter, and with one-way routes throughout the building and social distancing, there was even a queue for the gents. An in-seat drink service reduced queues at the bars, serviced by staff in the aisles with menus and card machines.

An opening speech by Andrew Lloyd Webber asserted “social distancing in theatres doesn’t work – it’s a misery for the performers”, and he stressed the importance of regional theatre and the upcoming pantomime season. The measures brought in to make this Palladium event happen have been in use in South Korea, for a production of The Phantom of the Opera in Seoul, which reopened just as the UK was going into lockdown. The air in the Palladium is sucked in from above the building, filtered and then expelled “in a better state than it was when it came in, so you’re safer in here [the Palladium] than you would be in Oxford Street”. A target date to reopen without social distancing was called for, with a message to Boris Johnson, “Give us a date, mate.”

Beverley Knight delivered a powerhouse performance, with songs drawn from her back catalogue as well as covers. From the world of musical theatre, there was a reprise of ‘Memory’ from Lloyd Webber’s Cats, and a most enjoyable rendering of ‘I’m Every Woman’ from The Bodyguard. Her most popular songs were all there – ‘Greatest Day’, ‘Get Up!’, ‘Shoulda Woulda Coulda’ and ‘Come As You Are’ – and with a little encouragement, much of the Palladium audience was on their feet, swaying and dancing along. This was, after all, a gig rather than a theatrical production. An acapella performance of ‘Stand By Me’ brought proceedings to an appropriate climax. We await the verdicts of Public Health England and HM Government on this and other pilot performances, and as the old adage would have it, better to have tried and failed than not to have tried at all.

9 to 5 The Musical Celebrates DOLLY PARTON Being Awarded 47 New Gold and Platinum Certifications. As the UK Tour recommences Dolly Parton’s 9 to 5 … END_OF_DOCUMENT_TOKEN_TO_BE_REPLACED

Bill Kenwright's legendary, award-winning production of the international smash hit musical, Blood Brothers returns to the stage in 2022 for a 16-week … END_OF_DOCUMENT_TOKEN_TO_BE_REPLACED

Georgia Lennon, Charlie Allen, and Nicola Bryan will play Marie, George, and Olive Osmond respectively in the World Premiere of The Osmonds: A New … END_OF_DOCUMENT_TOKEN_TO_BE_REPLACED