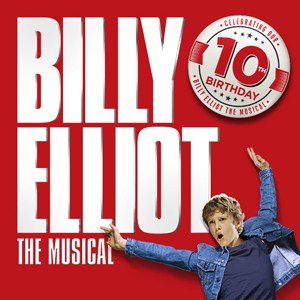 Billy Elliot The Musical premiered in the West End at the Victoria Palace Theatre, opening for previews on 31st March 2005 with the official Opening Night on 11th May 2005.

Join in the celebrations for Billy Elliot The Musical with many ticket offers currently available in differents seating areas.

Billy Elliot is a funny, heart-warming and feel-good celebration of one young boy’s dream in a gripping tale of triumph over adversity. This original story captured the hearts and minds of the world when the movie was released in October 2000. Nominated for 3 Oscars and 13 Bafta awards this poignant film broke box office records across the world.

This brilliant staging is an adaptation of one of the most adored British films of the last decade. The extraordinary movie written by Lee Hall, directed by Stephen Daldry and choreographed by Peter Darling, has been developed for the stage by the same multi-award winning creative team.

Set in a northern mining town against the background of the 1984/85 miners’ strike, Billy Elliot is the inspirational story of a young boy’s struggle against the odds to make his dreams come true.

Follow Billy’s journey as he stumbles out of the boxing ring and into a ballet class, where he discovers a passion for dance that inspires his family and whole community and changes his life forever.

Featuring a timeless score by Elton John, sensational dance and a powerful story, Billy Elliot the Musical, winner of the 2013 Olivier Audience Award, is a funny, uplifting and spectacular theatrical experience that will stay with you forever.

Victoria Palace Theatre
Evenings: Monday to Saturday 7.30pm
Matinees: Thursday and Saturday 2.30pm
Running Time: 3 hours
Age Restrictions: Contains frequent strong language, children under 7 will not be admitted. Not recommended for children under 12. Children under 16 must be accompanied by an adult.
Currently booking to 19th December 2015
Important Info: Contains some bad language and violence.
Ruthie Henshall will not appear on selected Tuesday performances.