BOOKING EXTENDS UNTIL 7 JANUARY 2023
WITH 30,000 TICKETS RELEASED
CHRISTMAS PERFORMANCE SCHEDULE ALSO ANNOUNCED
FOR THE MULTI-AWARD-WINNING AND CRITICALLY ACCLAIMED PRODUCTION OF
CABARET AT THE KIT KAT CLUB 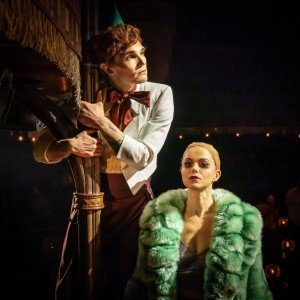 The multi-award-winning and critically acclaimed production of CABARET at the KIT KAT CLUB in London’s West End has now extended booking until 7 January 2023 with 30,000 tickets released. The Christmas performance schedule is also announced with details below. Casting from 4 October 2022 to be announced soon.

This unique production of CABARET opened in December last year to critical and audience acclaim, widely praised as the ultimate theatrical experience. In April this year, the production won a record-breaking seven Olivier Awards, the most for any musical revival in Olivier history, as well as three prestigious Critics Circle Awards.

In a time when the world is changing forever, there is one place where everyone can be free… Welcome to the Kit Kat Club, home to an intimate and electrifying new production of CABARET. This is Berlin. Relax. Loosen up. Be yourself.

Transforming one of London’s most famous theatres with an in-the-round auditorium and reimagined spaces, before the show guests are invited to enjoy and explore the Kit Kat Club with pre-show entertainment, drinks and dining all on offer. When booking, guests receive a ‘club entry time’ to allow enough time to take in the world of the Kit Kat Club before the show starts. But of course, the show really starts when you first join us in the club…

CABARET is directed by Rebecca Frecknall, set and costume design is by Tom Scutt with choreography by Julia Cheng. Musical supervision and direction is by Jennifer Whyte with lighting design by Isabella Byrd and sound design by Nick Lidster. The casting director is Stuart Burt and the associate director is Jordan Fein.

Cirque du Soleil has announced the London run for one of its most critically acclaimed touring show KURIOS— Cabinet of Curiosities. Opening on 13th … END_OF_DOCUMENT_TOKEN_TO_BE_REPLACED

Ambassador Theatre Group Productions are delighted to announce a UK and Ireland Tour of the pantomime MOTHER GOOSE. The first of its kind to tour the … END_OF_DOCUMENT_TOKEN_TO_BE_REPLACED

The National Theatre’s new musical Hex returns to the Olivier theatre for Christmas, after its original 2021 opening was delayed due to covid. The … END_OF_DOCUMENT_TOKEN_TO_BE_REPLACED