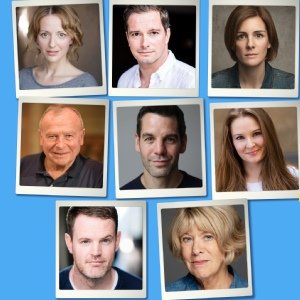 Rehearsals begin today for Sue Townsend’s The Secret Diary of Adrian Mole aged 13¾ – The Musical, which will open at the Ambassadors Theatre for a limited season from 15 June until 12 October 2019, with a Gala Night on Tuesday 2 July. The musical has book and lyrics by Jake Brunger, music and lyrics by Pippa Cleary and direction by Luke Sheppard.

The adult cast includes Rosemary Ashe (Felicia Gabriel in The Witches of Eastwick for which she was nominated for an Olivier Award, Carlotta in the original cast of The Phantom of the Opera, Madame Thenardier in Les Misérables, Sister Mary Lazarus in Sister Act UK tour, Kate Hoey MP in Committee at Donmar Warehouse) as Grandma, Lara Denning (Mrs Wormwood and Miss Honey in Matilda, West End, Ruthless The Musical at Arts Theatre, Mrs Bucket in Charlie and the Chocolate Factory, Theatre Royal Drury Lane) as Miss Elf/Doreen Slater, John Hopkins (Sir Francis Basset in Poldark, BBC, Endeavour, ITV, regular character Sergeant Dan Scott in Midsomer Murders, ITV, The Boys in the Band at Park Theatre/ Vaudeville, Much Ado About Nothing at Rose Theatre Kingston) as Mr Lucas/Mr Scruton, Andrew Langtree (Ned Ryerson in Groundhog Day at The Old Vic which earned him an Olivier Award nomination, Troilus & Cressida for the RSC, Imperium for the RSC, Gielgud Theatre, Justin Gallagher in Emmerdale from 2010 – 2012) as George, Amy Ellen Richardson (Ursula March in Sweet Charity at Donmar Warehouse, Kiss Me Kate at Sheffield Crucible, Beautiful: The Carol King Musical UK Tour, Merrily We Roll Along, Menier Chocolate Factory/Harold Pinter, Les Misérables, Queens Theatre) as Pauline, and Ian Talbot OBE (Artistic and Managing Director of Regent’s Park Open Air Theatre until 2008, Wilbur Turnblad in Hairspray at Shaftesbury Theatre, the Fool in King Lear, Hortensio in The Taming Of The Shrew and Trinculo in The Tempest, all for the RSC, Harry Trevor in Kiss Me Kate for BBC Proms, Geoffrey in Alphabetical Order at Bath Theatre Royal/ UK Tour) as Bert Baxtor. Also in the cast are Holly Ashton (1st cover Donna in Mamma Mia!, International tour, A Little Night Music, Frinton Summer Theatre) and Mathew Craig (Narrator in Blood Brothers, UK Tour, The Secret Diary of Adrian Mole, Aged 13 ¾, Menier Chocolate Factory, Rebel Leader in We Will Rock You, UK Tour and Dominion Theatre). The children’s cast is to be announced.

Set in 1980s Leicester, this adaptation of Sue Townsend‘s best-selling book is a timeless tale of teenage angst, family struggles and unrequited love, told through the eyes of tortured poet and misunderstood intellectual Adrian Mole. One of the most enduring comedy characters of all time, he is the hapless, hilarious, spotty teenager who captured the zeitgeist of 1980s Britain, and this critically acclaimed production brings Adrian’s story to life for a new generation of theatregoers.

“Honestly. My family just don’t understand me. Perhaps when I am famous and my diary is discovered people will understand the torment of being a 13¾ year-old intellectual” Adrian Mole.
The Secret Diary of Adrian Mole Aged 13¾ was Townsend’s first novel and was originally published in 1982 by Methuen, but is now published by Penguin Books. It has sold over 20 million copies worldwide, been translated into 30 languages, and spawned seven sequel Adrian Mole novels. The novels have previously been adapted for the stage, radio and television.

Originally commissioned by Curve and Royal and Derngate, Northampton.

Following on from the return of the critically-acclaimed, five-star production of Cyrano de Bergerac, The Jamie Lloyd Company brings Chekhov’s tale of … END_OF_DOCUMENT_TOKEN_TO_BE_REPLACED

THE PHANTOM OF THE OPERA at Her Majesty’s Theatre is delighted to announce that booking is extended to Saturday 4 March 2023, with a new performance … END_OF_DOCUMENT_TOKEN_TO_BE_REPLACED

Producer Runaway Entertainment is delighted to announce that the critically acclaimed, smash hit, supernatural thriller 2:22 - A Ghost Story will … END_OF_DOCUMENT_TOKEN_TO_BE_REPLACED