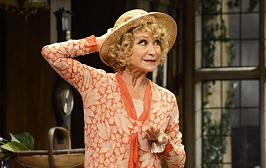 Felicity Kendal, one of the UK’s most popular actresses, plays Judith, the once glittering star of the London stage and member of the Bliss family. Together with her husband David, an egocentric novelist, and Sorel and Simon, their two Bohemian adult children – the family are incapable of sharing the spotlight. Unconventional, risqué, and often downright rude, they are everything a respectable English family should not be. When each member of the family invites a guest to their rural retreat, the unassuming visitors are thrown into a living melodrama. Misjudged meetings, secret seductions and scandalous revelations proliferate during one outrageous weekend in Berkshire.

Joining Felicity Kendal in this acclaimed production is Simon Shepherd as her husband David. Simon is probably best known as Dr Will Preston from ITV’s Peak Practice. He was last seen in the West End in The Duck House alongside Ben Miller and Diana Vickers.

One of the UK’s greatest directors of comedy, Lindsay Posner directs Coward for the first time with this production. His recent successes have included Noises Off, Abigail’s Party and Relatively Speaking.