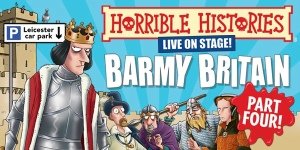 We all want to meet people from history. The trouble is everyone is dead! So it’s time to prepare yourselves for Horrible Histories live on stage with Barmy Britain – Part Four!

Be reduced to rubble by the ruthless Romans! Would you be shaken or stirred by Richard III? Will Queen Elizabeth I endure her terrible teeth? Would you be hanged by King James I for being a witch? Mount a mutiny against King Henry VIII! See Mary Tudor knock the spots off Mary Queen of Scots! Peep into the world of Samuel Pepys and help Georgian detectives find the headless man! Take a trip into the night with the night soil men and discover how to survive the first ever train ride!

After seven sensational years in the West End, Barmy Britain is back!

Terry Deary is the creator of Horrible Histories and one of Britain’s best-selling authors of the 21st Century. He’s also the tenth most-borrowed author in British libraries. There are around 50 Horrible Histories titles with total sales of 25 million in 40 countries. Deary is also the author of over 200 fiction and non-fiction books for young people including his series of books Dangerous Days. This summer will also see the release of Horrible Histories The Movie.

Neal Foster is the Actor/Manager of Birmingham Stage Company which since its foundation in 1992 has staged over eighty productions. The company has become one of the world’s leading producers of theatre for children and their families, including Horrible Histories Live on Stage for fourteen years in the UK, Dubai, Abu Dhabi, Qatar, Bahrain, Hong Kong, Singapore, New Zealand and Australia. Foster has written and directed all of the most recent Horrible Histories shows including the Barmy Britain series seen in the West End, across the UK, and abroad. In addition, the world première of Tom Gates which he adapted with the author Liz Pichon is currently touring the country through to 2020 and he is also adapting and directing Billionaire Boy , his third David Walliams stage show after Gangsta Granny and Awful Auntie.

Tom loves a laugh! But it’s no joke when he can’t even remember where he’s parked the car... Fortunately, his loving wife Trish comes to the … END_OF_DOCUMENT_TOKEN_TO_BE_REPLACED

Following a sell-out tour in 2018/2019, the producers of the smash-hit ROCK OF AGES are delighted to announce the cast and Kevin Clifton’s return in … END_OF_DOCUMENT_TOKEN_TO_BE_REPLACED

The classic tale of The Three Musketeers is brought to you by the inconceivable, unimaginable and fantastical FoolHardy Theatre… a company with … END_OF_DOCUMENT_TOKEN_TO_BE_REPLACED