The full cast is announced today for the 40th Anniversary tour of Michael Frayn’s multi-award-winning farce, Noises Off, which will open at Theatre Royal Bath from 22 September 2022, before heading on to Richmond, Brighton and Cambridge. 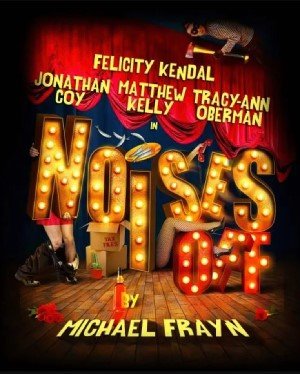 Joining the previously announced Felicity Kendal (The Good Life, Relatively Speaking and Hay Fever) as Dotty Otley will be stage and screen actors Tracy-Ann Oberman (EastEnders, Friday Night Dinner and Edmond) as Belinda Blair and Matthew Kelly (The Dresser, Waiting For Godot, as well as hosting Stars In Their Eyes and You Bet!) as Selsdon Mowbray.

One of the greatest British comedies ever written, Noises Off will be directed by Lindsay Posner (God of Carnage, Hay Fever, Stones in his Pockets)

Michael Frayn’s celebrated play serves up a riotous double bill – a play within a play. Hurtling along at breakneck speed, Noises Off follows the on and off-stage antics of a touring theatre company as they stumble their way through the fictional farce, Nothing On. From the shambolic final rehearsals before opening night in Weston-super-Mare, to a disastrous matinee in Ashton-Under-Lyme seen entirely, and hilariously silently, from backstage, before we share their final, brilliantly catastrophic performance in Stockton-on-Tees.

After watching from the wings a production of his 1970 farce The Two of Us with Richard Briers and Lynn Redgrave and noting that the goings on behind the scenes were funnier than out front, Michael Frayn wrote Noises Off. The original production opened in London in 1982 before becoming a worldwide hit. A feature film was made of Noises Off in 1992.

The Walt Disney Company UK and Ireland have announced further venues for Disney’s THE LION KING UK and Ireland Tour. The internationally … END_OF_DOCUMENT_TOKEN_TO_BE_REPLACED

The UK premiere of the play Apples In Winter beautifully gives voice to the hidden victims of crime. Jennifer Fawcett’s compelling play tells the … END_OF_DOCUMENT_TOKEN_TO_BE_REPLACED

The smash hit Tony Award-winning Broadway musical AIN’T TOO PROUD – The Life and Times of The Temptations, will bring the incredible true story of the … END_OF_DOCUMENT_TOKEN_TO_BE_REPLACED

Full casting is announced for the UK tour of the classic Ealing Comedy, The Lavender Hill Mob, based on the screenplay by T.E.B. Clarke, adapted for … END_OF_DOCUMENT_TOKEN_TO_BE_REPLACED

This October, at Waterloo East Theatre, London, you are invited to join the sales conference to end all sales conferences. Sam, the head of IT … END_OF_DOCUMENT_TOKEN_TO_BE_REPLACED