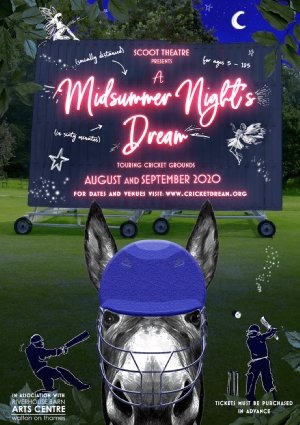 Scoot Theatre have announced the cast for their outdoor tour of A Midsummer Night’s Dream, directed by Joseph O’Malley (The 39 Steps, The Hound of the Baskervilles, Ben Hur – The Barn Theatre) Made up of West End, National Theatre and RSC alumni, the cast is SALLY CHENG (Twelfth Night and A Christmas Carol with the Royal Shakespeare Company), CLAIRE-MARIE HALL (Les Miserables, The Grinning Man in the West End and The Wicker Husband at The Watermill), TRICIA ADELE-TURNER (Dear Evan Hansen, We Will Rock You, Legally Blonde – all West End), JOSEPH PROWEN (Twelfth Night at the RSC, Teddy at the Southwark Playhouse and An Ideal Husband at Chichester) and DAVID CARLYLE (The Tell-Tale Heart at the National Theatre, To Kill A Mockingbird at Regent’s Park, and Channel4 and HBO’s upcoming Boys). They join the previously announced AARON SIDWELL (Eastenders, Wicked UK Tour and Loserville: The Musical in the West End).

The sixty-minute, socially distanced production will be touring cricket grounds in August and September. Starting in the Surrey area, visiting Worplesdon, East Molesey, Shepperton, Esher and Walton-on-Thames, the show will then head to The Barn Theatre in Cirencester for the Bank Holiday weekend, to take part in their recently announced outdoor festival BarnFest.

Seating for the show is offered in the form of 2 metre by 2 metre picnic “squares”, which can hold up to five people. These squares are distanced 2 metres from any other square and all tickets have to be purchased in one transaction.

Scoot Theatre is a new company, formed by Artistic Director Max Hutchinson to create bold and exciting work for all ages: “We want to help people enjoy watching live theatre again in a safe and responsible way, so we’ve designed our production to be socially distant both on and off stage. We know that people aren’t going to have a good time if they’re worried about safety, so we are rigorously following the government Covid Secure guidelines.

The seating arrangement is just one of the steps we are taking to minimize risk. We’re working with each venue to ensure best practice, including providing plenty of hand sanitizer, controlling both queue management and audience size, as well as implementing one-way systems. One of the safety advantages of cricket clubs themselves is the fact that they are naturally big, open and airy spaces!”

Artistic Director Max Hutchinson about the cast: “I’m absolutely thrilled with the amazing cast that we’ve assembled, many of whom were in the middle of contracts when lockdown began. I’m hugely grateful also to the cricket clubs we’re visiting for coming on board. I hope that people will come out to support the arts and their local clubs. It’s been a tough time for everyone and I hope that we can provide a joyful, light-hearted sixty minutes of escapism for our audiences!”