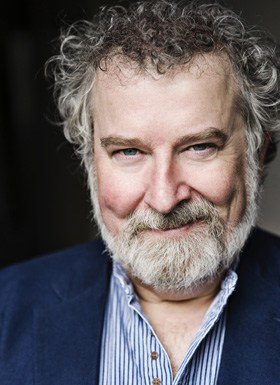 Jonathan Maitland said, “When I wrote Dead Sheep in 2014 I knew it would be resonant. But it now feels uncanny. Then, as now, it was a story of a government split over Europe, agonising conflicts of loyalty, and a fatal miscalculation by a seemingly impregnable Prime Minister. The timing couldn’t be sweeter: especially since we’re playing Birmingham in September, during the week of the Tory party conference. We’re considering a special seating policy for that leg of the tour: Remainers in the circle, Leavers in the stalls…”

It is 1989 and a seemingly invincible Prime Minister has sacked her Foreign Secretary Geoffrey Howe, thinking she had nothing to fear from him; his speaking skills had, famously, been compared to those of a dead sheep. But inspired by his wife Elspeth – a formidable and witty feminist, whose relationship with Thatcher was notoriously frosty – Howe overcame his limitations to destroy Mrs Thatcher’s political career…and also his own.

Dead Sheep portrays the true story of how Mrs. Thatcher, the most divisive Prime Minister of modern times, was brought down by her one time friend and political soul mate Geoffrey Howe. Using imagined dialogue to portray private scenes between the main protagonists, it recreates the events leading up to Howe’s famous 1990 speech, in which he criticised Thatcher for undermining policies on economic and monetary union in Europe, ultimately leading to her downfall and resignation. Dead Sheep is the result of two years’ research, during which the playwright gained access to Geoffrey Howe himself and other prominent politicians and advisers of the era.

Q: How relevant is Dead Sheep, post Brexit ?
A: Unbelievably! Dead Sheep is about a Tory government in 1989 split over Europe and the agonising conflicts of loyalty that followed. It has been exactly the same story in 2016. The timing couldn’t be better. There are some scenes that feel so current it’s spooky. For example when two ministers discuss the possibility of quitting the EU. One of them says: “We can’t leave Europe now. It’d be too complicated. Like the political equivalent of reversing a vasectomy.”

Q: The parallels seem almost uncanny…
A: You’re telling me. They say “history doesn’t repeat itself, it rhymes”, and this story rhymes perfectly with the earlier one. The key reason why Geoffrey and Margaret fell out was Europe. It was the fatal fault line that ran through the Tory Party in the 1980s. As we know, it’s still a bit of an issue now. To put it mildly. And then, as now, a seemingly impregnable PM made a fatal miscalculation. In Thatcher’s case, it was underestimating Howe; in Cameron’s, it was calling the referendum.

Q: What made you write it?
A: It’s a fantastic story, and everyone remembers Geoffrey Howe’s electrifying speech which brought down Mrs Thatcher. It was totally unexpected and a brilliant piece of oratory. It’s gone down in history as one of the greatest political speeches ever. But what makes it special is that no one could have predicted it: Geoffrey was famously described as having the speech making skills of a “dead sheep” by his opposite number, Dennis Healy. He was the Mouse That Roared.

Q: Why base the play on Geoffrey Howe?
A: I’ve always been fascinated by him. He brought about the end of Margaret Thatcher and Thatcherism, and yet he was quiet, uncharismatic, and the butt of jokes. He was a fascinating mixture of Political Dartboard and Great Statesman – Captain Mainwaring meets William Gladstone.

Q: There have been many plays and films about this era: what’s new about this play?
A: The film ‘The Iron Lady’ and the play ‘Handbagged’ and various TV films and dramas about Mrs Thatcher were entertaining but treated Geoffrey Howe – for understandable reasons – as a bit part player. He was more than that. He was a great statesman and the key to understanding Margaret Thatcher. You can chart her rise and fall through her relationship with him. And it now feels more relevant than ever, as I said: political infighting is very conducive to good drama. The Howe element was the most dramatic bit of the whole tale but everyone left it out – until now.

Q How would Geoffrey feel about Brexit ?
A He sadly passed away last year but I suspect he’s been spinning furiously ever since the result was announced.

Q: So is this play about Margaret or Geoffrey?
A: Good question! Both really. But primarily Geoffrey and the agonising conflicts of loyalty he faced. The reason it’s been so popular (it broke the box office record at the Park Theatre London, where it received its world premiere) is because so many people associate with his story: a man caught between two strong women. In his case, the women were Margaret Thatcher and his wife, Elspeth Howe, a formidable, witty feminist who was a champion of women’s rights. Fascinatingly, Margaret and Elspeth loathed each other. One observer described them as ‘wasps in a jam jar’ – that’s a fantastic starting point for a play.

Q: Howe was famously uncharismatic: isn’t that a problem for the hero of a play ?
A: Not at all. I think uncharismatic people are really interesting. It’s the quiet ones you’ve got to watch. “He who swims with his fin submerged eats the heartiest breakfast” as they say. The narrative arc of Geoffrey’s story is amazing. He went from being a man who was famous for having no oratorical skills at all – hence the label of “dead sheep” – to making one of the greatest political speeches ever. That’s an amazing journey. And when you add the comedy and tragedy that occurred along the way, it makes for a fantastic, entertaining story.

Q: Was it a risk to cast a man (Steve Nallon, of Spitting Image) as Mrs Thatcher?
A: I was worried to begin with. My friend Alastair McGowan, the comedic actor, suggested it. We gave it a go because I like taking risks. And when Steve read the part for the first time in front of a public audience it was a no brainer. Everyone was mesmerised. This is no impersonation: Steve is a brilliant actor. Indeed many people still haven’t twigged that Mrs.Thatcher is being played by a man! It’s one of the most nuanced, compelling, comi-tragic performances I’ve seen.

Following its multiple West End runs, and continuing success at its home – The Other Palace, Heathers the Musical will embark on its highly … END_OF_DOCUMENT_TOKEN_TO_BE_REPLACED

After creating the “absorbing and provocative” Version 2.0 and the “eminently lovable” Letters, Kashyap Raja returns to London with his new play Earth … END_OF_DOCUMENT_TOKEN_TO_BE_REPLACED