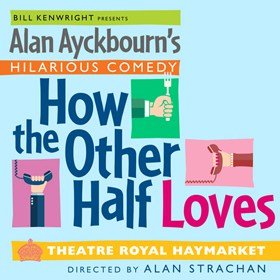 Casting has been announced for Bill Kenwright’s new West End production of Alan Ayckbourn’s farcical tale of matrimonial mishaps, How The Other Half Loves. The 1969 classic – the first of Ayckbourn’s plays to be staged on Broadway – returns to London to play the Theatre Royal Haymarket from Wednesday 23 March 2016 – Saturday 25 June, with a press night on 31 March 2016.

As Bob and Fiona clumsily try to cover up their affair, their spouses’ intervention only adds to the confusion. William and Mary Featherstone become stuck in the middle, falsely accused of adultery and with no idea as to how they’ve become involved. The plot culminates in two disastrous dinner parties on successive nights, shown at the same time, after which the futures of all three couples seem in jeopardy…

Olivier Award nominated star of stage and screen Nicholas Le Prevost will play ‘Frank Foster’ opposite Jenny Seagrove as ‘Fiona Foster’. Jenny starred in Ayckbourn’s Absurd Person Singular in the West End in at the Garrick in 2007, and is best known for her role as ‘QC Jo Mills’ in ITV’s Judge John Deed.

Jason Merrells, one of TV’s most popular actors from roles in Lark Rise to Candleford, Cutting It and Waterloo Road, and recently seen as ‘Juror Number 8’ in Twelve Angry Men, will play ‘Bob Phillips’ opposite Tamzin Outhwaite as ‘Teresa Phillips’, known for her numerous lead television roles such as ‘Melanie Owen’ in EastEnders and ‘Rebecca Mitchell’ in Hotel Babylon. She returns to the Haymarket after her starring role in Sweet Charity, and it was Ayckbourn who gave Tamzin her first professional role in a play twenty years ago in Absent Friends at the Stephen Joseph Theatre.

Matthew Cottle, star of BAFTA nominated Game On, and most recently seen in Ayckbourn’s A Small Family Business at the National Theatre in 2014, will play ‘William Featherstone’ opposite Gillian Wright as ‘Mary Featherstone’. Gillian is nationally known for her award-winning role as ‘Jean Slater’ in EastEnders.

The multi-award-winning musical Come From Away, which celebrated its 1000th performance in the West End last night, Monday 28th November, announces … END_OF_DOCUMENT_TOKEN_TO_BE_REPLACED

The UK and Ireland Tour of Disney’s The Lion King will welcome 12 new members to its cast of over 50 actors, singers and dancers this winter. The … END_OF_DOCUMENT_TOKEN_TO_BE_REPLACED

The full cast has been announced for ONCE – IN CONCERT at the London Palladium on Sunday 12 March (at 3pm and 7pm). ONCE - IN CONCERT, which went on … END_OF_DOCUMENT_TOKEN_TO_BE_REPLACED

Agatha Christie’s iconic thriller, The Mousetrap, the longest-running play in the world, marks its 70th anniversary today by announcing that the show … END_OF_DOCUMENT_TOKEN_TO_BE_REPLACED