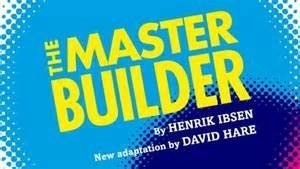 The Old Vic have announced the full cast for their upcoming production of Henrik Ibsen’s The Master Builder in 2016.

Joining the previously announced Ralph Fiennes in the production, which opens at the Old Vic Theatre in January 2016, will be Linda Emond as Aline Solness, James Laurenson as Knut Brovnik, Charlie Cameron as Kaja Fosli, James Dreyfuss as Dr Herdal and Sarah Snook as Hilde Wangel. Fiennes plays the leading role of Halvard Solness.

Halvard Solness, a master architect, has spent his lifetime building the tallest spires in the land. Now at the height of his career and with a powerful position in the community he seems to have it all, but when Hilde, a radiant country girl, descends unexpectedly into his world cracks begin to show as age is confronted by youth and a series of revelations build to a tragic climax.

Henrik Ibsen’s The Master Builder is set to run at the Old Vic Theatre in a new adaption by David Hare. Directed by Matthew Warchus, the production also has designs by Rob Howell, sound design by Simon Baker and lighting design by Hugh Vanstone.

Ralph Fiennes is a stage and screen actor whose recent theatre credits include Shaw’s Man and Superman at the National Theatre and Trevor Nunn’s production of The Tempest at the Theatre Royal Haymarket. His film credits include the new Bond film Spectre, The Grand Budapest Hotel and the Harry Potter films. He made his feature film directorial debut in 2011 with Coriolanus and in 2013 he directed and starred in The Invisible Woman.

Linda Emond is an American actress who was most recently seen on Broadway in the revival of Cabaret at Studio 54, for which she was nominated for a Tony Award. She was also nominated for Tony Awards for her performances in Death of a Salesman and Life x3.

Sarah Snook is one of Australia’s most exciting young actresses. Her theatre credits include King Lear (South Australian Theatre Company), Lovely/Ugly: Transformer, Crestfall and S27 (Griffin Theatre Company). Her television credits include The Secret River, The Moody’s, Redfern Now, Spirited Series 2, Blood Brothers, Packed To The Rafters, My Place, All Saints and Australian series, The Beautiful Lie, in which she played the lead role.

David Hare is a multi-award-winning writer and author of 32 plays for the stage including Skylight, The Absence Of War, Amy’s View, Pravda and Stuff Happens