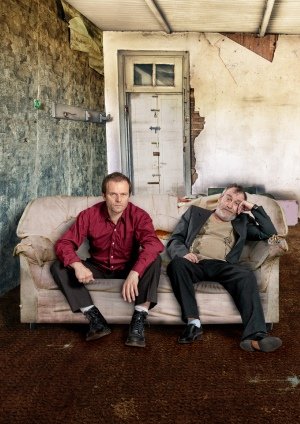 Casting has been confirmed for Park Theatre’s World Premiere dark drama, The Weatherman. Written by Eugene O’Hare, the production will star Mark Hadfield, Niamh James, Alec Newman, Cyril Nri and David Schaal. Examining the no go lines people will cross when it’s too dangerous to run away, the play, directed by Alice Hamilton, will have a national press night on Wednesday 21 August, 7pm.

Beezer and O’Rourke live on the fringes of society in a dingy London flat, struggling to make ends meet. Despite living life at the bottom of the heap, the savage banter of their dysfunctional relationship keeps the pair afloat.

When their dodgy landlord, Dollar, makes them a ‘business’ proposition, O’Rourke finds himself selling out for the cost of a few months’ rent. The price? Take care of a mystery special package. Just for a few months. Easy job. Easy money. As the weight of a heavy conscience becomes too much to bear, the outlook for tomorrow becomes increasingly dark, with a storm brewing on the horizon.

Eugene O’Hare’s first play in Park Theatre’s 2019 season shines a light on complicity, and its intriguing web of secrets and lies woven behind closed doors.

Niamh James (Mara) makes her professional debut at Park Theatre, having trained at The Royal Central School of Speech and Drama. Her credits whilst training include: Lost Empires and A Permanent State of Emergency.

Please note that this play contains distressing scenes and themes of abuse that may be triggering for some. Not suitable for children.

This production is supported by Park Theatre’s Producers’ Circle.

Playwright Eugene O’Hare is a writer and actor. He has written for National Theatre Connections and short stories for BBC Radio 4. In 2017 he penned the BBC short film The Music Room featuring the Ulster Orchestra. He is currently developing original work for theatre, television and film. The Weatherman, along with Sydney & The Old Girl starring Miriam Margolyes and Mark Hadfield, are his

debut full length plays, both published by Bloomsbury in 2019 and performed at Park Theatre. Eugene is a member of Field Day Theatre Company.

Director Alice Hamilton’s work includes: Paradise and Every Day I Make Greatness Happen (Hampstead Theatre), The March on Russia and German Skerries (Orange Tree), While We’re Here and Visitors (Bush Theatre), Echo’s End (Salisbury Playhouse), Orca and Orson’s Shadow (Southwark Playhouse), Thirty Christmases (Supporting Wall), Eventide (Arcola and tour), Fear of Music (Up in Arms/Out of Joint tour), and At First Sight (Latitude Festival and tour). She has worked as Staff Director at the National Theatre, and directed development workshops and rehearsed readings with the Royal Court, Almeida, National Theatre and High Tide. Alice is co-artistic director of Up in Arms.

After sell-out runs at Hope Mill Theatre, Manchester, and The Park Theatre, London, in 2022, Maureen Lipman returns to the West End with a performance … END_OF_DOCUMENT_TOKEN_TO_BE_REPLACED

THE PHANTOM OF THE OPERA at Her Majesty’s Theatre today announces Jon Robyns as ‘The Phantom’ from Monday 3 April 2023, Holly-Anne Hull as ‘Christine … END_OF_DOCUMENT_TOKEN_TO_BE_REPLACED

2023 marks the 50th Anniversary of the legendary smash hit musical The Rocky Horror Show, as it continues to play a newly extended tour through 2023 … END_OF_DOCUMENT_TOKEN_TO_BE_REPLACED