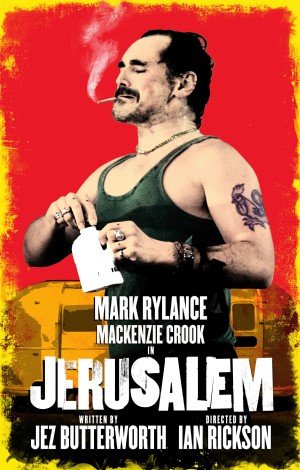 Sonia Friedman Productions and the Royal Court Theatre are delighted to present the return of Jerusalem to London’s West End for a strictly limited 16-week engagement. Previewing at the Apollo Theatre from 16 April 2022 with the opening night on 28 April 2022, Jerusalem will run until 7 August 2022.

Forty day seats for each performance will be available for purchase in person at the Apollo Theatre box office on the day of the performance from 10am. Limited to two tickets per person, they will be £10.00 for preview performances and £15.00 post opening. In addition, every Monday from the week commencing 18 April, 300 seats will be released for that week’s performances on jerusalemtheplay.co.uk at 10am. Limited to four tickets per person, prices for previews will be from £10.00 with post opening prices from £15.00.

Jez Butterworth’s award-winning play, which premiered at the Royal Court in 2009, returns to the West End following record-breaking sold-out runs at the Royal Court and the Apollo Theatres in 2009, 2010 and 2011, as well the Music Box Theater on Broadway in 2011.

On St George’s Day, the morning of the local county fair, Johnny Byron is a wanted man. The Council officials want to serve him an eviction notice, his son wants his dad to take him to the fair, Troy Whitworth wants to wreak his revenge and a motley crew of mates wants his ample supply of drugs and alcohol.

PW Productions are delighted to announce the new cast of Susan Hill’s THE WOMAN IN BLACK at The Fortune Theatre, London. Julian Forsyth returns to the … END_OF_DOCUMENT_TOKEN_TO_BE_REPLACED

Full casting is announced for the award-winning smash-hit production of Girl From The North Country, written and directed by celebrated playwright … END_OF_DOCUMENT_TOKEN_TO_BE_REPLACED

The producers of Jim Steinman’s Bat Out of Hell – The Musical, featuring Jim Steinman and Meat Loaf’s greatest hits, are delighted to announce the … END_OF_DOCUMENT_TOKEN_TO_BE_REPLACED

ABBA Voyage is the long-awaited concert from one of the biggest pop acts of all time. Featuring a setlist of hit songs, see ABBA’s avatars accompanied … END_OF_DOCUMENT_TOKEN_TO_BE_REPLACED