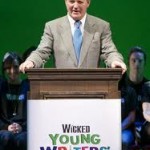 The National Theatre’s stage production of War Horse has been running in the West End since 2007 and is showing no signs of surrendering its hold on the London theatre scene just yet. The show, which is currently playing at the New London Theatre, recently extended its booking period into next year, with tickets now available to buy until 27th October 2014. The stage play was adapted from children’s writer Michael Morpurgo’s 1982 novel of the same name, and its popularity also led to a film version, which was directed by Steven Spielberg and released late 2011. The novel has benefitted from the success of its spin-off siblings, with Morpurgo saying in an interview last year last year that sales have now gone from a couple of thousand copies a year to over a million, and that it has also since been translated into over 40 languages. It’s gratifying to see the stage play continue to grow in appeal, as it would never have become such an acclaimed, award-winning piece of theatre in the first instance, if not for Morpurgo’s original book.

Writing should always be encouraged, as it provides such joy to the world and is the inspiration behind many a creative mind’s masterpiece. As Morpurgo himself said: “We tell stories every day of our lives.” You only have to step outside and listen to the people on the street to find them. We create amazing works in our everyday conversations, but often fail to make them a reality by actually writing them down. The British author said that many people think that writing is for “clever folks”, but actually likened it to being, “as natural to us as swimming” (The Huffington Post). His belief in the encouragement of young writers is what led him to first become involved in the Wicked Young Writers Award, which returned this month for its fourth year running. It was established by the long-running musical Wicked, the West End production of which has been playing at the Apollo Victoria since 2006. The aim of the Award was to link the important messages of the production with a competition that would inspire young people to use their writing to look at life a little differently.

Wicked is a stage musical based on Gregory Maguire’s 1995 novel Oz: The Life and Times of the Wicked Witch of the West. It offers an alternative perspective of the classic Wizard of Oz story, this time with the focus on the witches of Oz and beginning long before Dorothy ever arrives. Wicked tells the story of unlikely friends Elphaba (the Wicked Witch of the West) and Glinda (the Good Witch of the North), and addresses the many shades of grey between being good and, well, wicked.  The Award recognises excellence in writing, encourages creativity, and helps develop writing talent in young people between 5-25 years of age from all backgrounds and areas of the UK and Ireland. It opened for entries on Monday 9th September 2013 and will take submissions until spring 2014, accepting a variety of writing styles from poetry to prose and dividing entrants into five age categories of 5-7, 8-10, 11-14, 15-17 and 18-25.

A shortlist of 100 entrants will be invited to attend a special prize event at the Apollo Victoria Theatre in summer 2014, where all will receive a copy of the annual ‘Wicked Young Writer’s Award Anthology’ containing their published entry. The individual winners from each of the five categories will then be announced before being presented with a certificate signed by patrons Michael Morpurgo and HRH the Duchess of Cornwall, as well as tickets to see Wicked performed on stage with their friends or family.

This is the fourth year that Morpurgo has lent his name to the Award, praising it as a way to, “inspire so many young people to write passionately and from the heart, and to celebrate their own unique voice.” He is not just a voiceful supporter of the Award though, the British author is also part of its judging panel alongside Dean Atta (poet and playwright), Jonathan Douglas (director of the National Literacy Trust) and Michael McCabe (executive producer of Wicked). Speaking about the competition, McCabe said: “As Wicked continues in London and also embarks on its first-ever UK & Ireland Tour, I am hugely excited at the prospect of engaging even more young people with this fantastic creative writing scheme and delighted that this year we have been able to extend the geographic reach to include Ireland as well as the UK.”

Reading was at the heart of some of my happiest childhood memories, and I still get through books at a rapid rate. Wicked cast member Gina Beck (Glinda) spoke about some of her favourite childhood stories in regards to the Award last year, naming such books as The Worst Witch, The Queen’s Nose, Watership Down and The Animals of Farthing Wood – staples of any childhood. She said that: “Magic and animals seem to have been the major themes of my favourite books whilst growing up, and luckily I can find both in Oz!” So many people grew up accompanied by their favourite books, and their love of reading may never have begun if those authors never wrote those books in the first place. This scheme is a wonderful way to highlight the importance of writing and offer a platform for young writer’s voices to be heard. Michael Morpurgo said that everyone has a story to tell, and the Wicked Young Writer’s Award exists to let people tell them. Numerous novels have been the foundation upon which many a successful theatre production has been built (War Horse, Wicked, Matilda, Les Miserables, The Phantom of the Opera ) and who knows, one of the entrants in this year’s Award could end up writing such another in the future.

The National Theatre’s new musical Hex returns to the Olivier theatre for Christmas, after its original 2021 opening was delayed due to covid. The … END_OF_DOCUMENT_TOKEN_TO_BE_REPLACED

As it celebrates its 8th anniversary in the West End, The Play That Goes Wrong, the Olivier Award-winning smash hit announces an extension to the … END_OF_DOCUMENT_TOKEN_TO_BE_REPLACED

Producer Josh Andrews has today announced the lead cast for the UK tour of Peter James’ Wish You Were Dead: George Rainsford, will star as James’ … END_OF_DOCUMENT_TOKEN_TO_BE_REPLACED

MAMMA MIA! THE PARTY, London’s premier dining experience, is delighted to announce the new cast arriving at Nikos Taverna on the Greek island of … END_OF_DOCUMENT_TOKEN_TO_BE_REPLACED

Perform Productions is delighted to announce the cast and creative team for the West End premiere of Magical Merlin this October half-term. The … END_OF_DOCUMENT_TOKEN_TO_BE_REPLACED