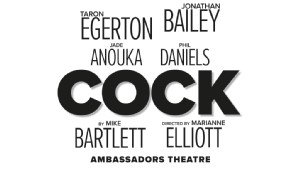 Directed by Tony and Olivier award-winning Marianne Elliott, it will have a limited run at the Ambassadors Theatre in London from Saturday 5 March 2022 to Saturday 4 June 2022, with a press night on Tuesday 15 March 2022.

‘The fact is that some of us like women and some like men and that’s fine that’s good in fact that’s good, a good thing, but it seems to me that you’ve become confused.’

John (Jonathan Bailey) is happy in himself and with his boyfriend (Taron Egerton), until one day he meets the woman of his dreams (Jade Anouka).

In a world full of endless possibilities why must we still limit ourselves with labels? Mike Bartlett’s razor-sharp play redefines the battle of the sexes as we know it.

Marianne Elliott said “I feel so excited to be working on this beautifully crafted and hilarious play by Mike Bartlett. It keeps you on the edge of your seat throughout. A truly theatrical piece in that it asks the audience to enter the imagination of the storytelling – as only live theatre can do. It’s also all about the acting so to have such a talented, highly experienced, stellar cast is an absolute dream!”

Mike Bartlett added: “I love Marianne Elliott’s work and have done for a long time, so I’m thrilled to be able to collaborate with her on this revival. Especially with this incredible cast, which I know will bring both a fresh take and vast experience to a play about love, identity and the passionate human being.”

Taron Egerton won a Golden Globe for his portrayal of Sir Elton John in Rocketman and also recorded the original song for the film I’m Gonna Love Again with Sir Elton which went on to win Best Original Song at the Academy Awards. He will next be seen starring in Blackbird, a limited series drama for Apple TV alongside Paul Walter Hauser, Tetris directed by Jon S. Baird and produced by Matthew Vaughn for Apple + and is also set to star in Claire Denis’ romantic drama thriller Stars at Noon, opposite Margaret Qualley. Egerton shot to fame when he played Gary ‘Eggsy’ Unwin in Matthew Vaughn’s Kingsman: The Secret Service and reprised the role in Kingsman: The Golden Circle. Other credits include Eddie the Eagle, Testament of Youth, Legend, Sing, Robin Hood, and The Dark Crystal: Age of Resistance. On stage he has appeared in The Last of the Haussmans at the National Theatre and Tommy in No Quarter at the Royal Court Theatre.

Jonathan Bailey won an Olivier Award for his ground-breaking role of Jamie in Marianne Elliott’s West End revival of Stephen Sondheim and George Furth’s musical Company. Jonathan plays Viscount Anthony Bridgerton in the Netflix’ period drama, Bridgerton, a role he is reprising in the second series scheduled for release in 2022. His other TV credits include the ITV series Broadchurch, Leonardo da Vinci in Leonardo, Me and Mrs Jones, Doctor Who and WIA (all for the BBC) and Crashing and Chewing Gum for Channel 4. His theatre credits include David Hare’s South Downs, American Psycho at the Almeida Theatre, The York Realist at The Donmar Warehouse, and King Lear (alongside Sir Ian McKellen) for Chichester Festival Theatre.

Jade Anouka’s recent TV credits include Ruta Skadi in BBC/HBO’s His Dark Materials, Channel 5’s The Drowning and ITV’s Cleaning Up. Her film credits include Ear For Eye, Fisherman’s Friends and Last Christmas. In theatre Jade has played the title roles in Hampstead’s Olivier nominated The Phlebotomist and Queen Margaret at The Royal Exchange. Other theatre credits include Moon On A Rainbow Shawl at The National Theatre, Doctor Faustus in the West End and the Donmar Warehouse Shakespeare Trilogy where she played Mark Antony in Julius Caesar, Hotspur in Henry IV and Ariel in The Tempest. She wrote, directed and co-starred in a short film – Her & Her for BBC’s Culture In Quarantine series which has since got in to 23 film festivals.

Phil Daniels’ early films include Anoop and the Elephant, Bugsy Malone, Breaking Glass, Scum and the central role of Jimmy in Quadrophenia. He starred in a 1985 British snooker musical, Billy the Kid and the Green Baize Vampire. More recent films include playing the voice of Fletcher in Chicken Run, Free Jimmy, Freebird, Vinyl and The Hatton Garden Job. He narrated tracks Parklife and Me, White Noise on the Parklife and Think Tank albums for Blur. On TV, he played Kevin Wicks in EastEnders and appeared in Sunnyside Farm, Time Gentlemen Please, and Rock and Chips. His theatre credits include: The Merchant of Venice, The Jew of Malta and A Clockwork Orange for the RSC, This House for the National Theatre, King Lear at Chichester Festival Theatre and Thenardier in Les Miserables in the West End.

Mike Bartlett is a multi-award-winning writer for both stage and screen. His five part drama series Doctor Foster won the National Television Award for Best New Drama and was seen by almost 10 million viewers. Other television work includes Life, Doctor Foster series 2, King Charles III, Sticks and Stones, Trauma, Press, Doctor Who and The Town. Bartlett’s stage plays include: Vassa, Albion and Game for the Almeida Theatre, Snowflake for Arts at the Old Fire Station; Wild at Hampstead Theatre; the Olivier Award winning King Charles III at the Almeida Theatre, Wyndham’s Theatre and Music Box Theatre in New York (also winner of the Critics’ Circle Award for Best Play 2014); An Intervention for Paines Plough and Watford; Bull at Sheffield Theatres, Off Broadway and the Young Vic (Winner of Best New Play at the National Theatre Awards 2013); Medea for Headlong, Glasgow Citizens, Watford Theatre and Warwick; Chariots of Fire at the Hampstead Theatre the Gielgud Theatre in the West End; 13 at National Theatre; Cock for the Royal Court; Decade for Headlong; Earthquakes in London for Headlong and the National Theatre; Love, Love, Love for Paines Plough, Plymouth Theatre Royal, the Royal Court, Roundabout Theatre Company, New York and the Lyric Hammersmith Theatre; Contractions for the Royal Court and Crucible Theatre, Sheffield; My Child for the Royal Court; Artefacts for the Bush Theatre and Honest for the Theatre Royal Northampton.

Marianne Elliott recently directed Stephen Sondheim and George Furth’s Company at the Gielgud Theatre. It won four Olivier Awards including ‘Best Revival of a Musical’. Its Broadway transfer will re-open (following the Covid shutdown) in New York this autumn. Her other shows for Elliott & Harper include the Olivier Award winning Death of a Salesman (co-directed with Miranda Cromwell) in the West End and at the Young Vic. For the National Theatre she directed the Olivier and Tony award-winning Angels in America (in London and on Broadway), the Olivier and Tony-award-winning The Curious Incident of the Dog in the Night-Time (at the NT, West End, on Broadway and on tour). She co-directed the world-wide hit War Horse alongside Tom Morris (at the NT, West End on Broadway and on tour). She received a Tony Award for Best Direction of a Play for War Horse. On winning the Tony Award for Curious Incident in New York, Marianne became the first woman in Broadway history to have won two Tony Awards for Best Direction of a Play. Other productions at the NT include The Light Princess, Women Beware Women, Port, Saint Joan (Olivier Award for Best Revival, South Bank Show Award) and Pillars of the Community (Evening Standard Best Director Award). Elliott recently directed two of the episodes of Alan Bennett’s Talking Heads for the BBC.

After creating the “absorbing and provocative” Version 2.0 and the “eminently lovable” Letters, Kashyap Raja returns to London with his new play Earth … END_OF_DOCUMENT_TOKEN_TO_BE_REPLACED