The multi-award-winning musical Come From Away, which celebrated its 1000th performance in the West End last night, Monday 28th November, announces today that the production will launch its first-ever tour of the U.K. and Ireland, opening in Leicester in February 2024. Further information on tour venues and dates will be announced soon, however, to be first in line for tickets and details, please register interest at comefromawaylondon.co.uk 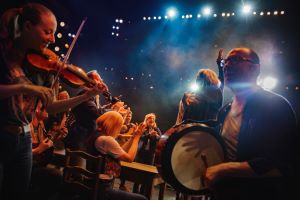 As previously announced, the London production of Come From Away, which has been seen by more than 850,000 people at the Phoenix Theatre, will end its critically acclaimed engagement on 7 January 2023.

Winner of Best New Musical across the globe, Come From Away shares the incredible real-life story of the 7,000 air passengers from all over the world who were grounded in Canada during the wake of 9/11, and the small Newfoundland community that invited these ‘come from aways’ into their lives.

Experience the joy, heartache and soaring music as the spirited locals and global passengers overcome their fears and a world of cultural differences to come together and forge friendships that will stay with them forever. The first female American Airlines captain, the quick-thinking town mayor, the mother of a New York firefighter and the eager local news reporter are among the many real characters caught at the start of the moment that changed the course of history, and whose stories became a true celebration of hope, humanity and unity.

The international hit musical has celebrated sold-out, record-breaking engagements on Broadway, in Canada, throughout Australia, and on a 60-city North American Tour.

COME FROM AWAY
Phoenix Theatre, London

After creating the “absorbing and provocative” Version 2.0 and the “eminently lovable” Letters, Kashyap Raja returns to London with his new play Earth … END_OF_DOCUMENT_TOKEN_TO_BE_REPLACED