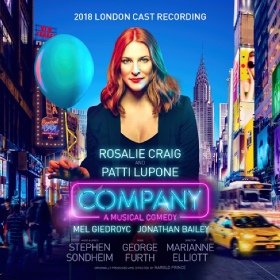 Marianne Elliott directs Stephen Sondheim and George Furth’s legendary musical comedy about life, love and marriage, with performances at the West End’s Gielgud Theatre until 30th March 2019. The critically acclaimed hit musical of 2018 begins at Bobbie’s (Rosalie Craig) 35th birthday party with all her friends wondering why she isn’t married, why she can’t find the right man and why she can’t settle down and have a family. The multi-award-winning musical comedy includes Stephen Sondheim’s iconic songs, Company, You Could Drive a Person Crazy, The Ladies Who Lunch, Side by Side and Being Alive.

The winner of two Evening Standard Theatre Awards and two Critics Circle Awards, Marianne Elliott, in close collaboration with Stephen Sondheim, has re-invented Company for a 21st-century audience with a female lead.

Marianne Elliott, said: “I’m absolutely thrilled that we are able to share our production of Company with audiences with this brand-new cast recording. We had the absolute pleasure of having Stephen Sondheim in the studio making sure it is the very best it can be. As we near the end of our run in the West End, it is a joy to have this permanent record of a show that has meant so much to all of us.”

Rosalie Craig who plays Bobbie, added: “I am so thrilled that this wonderful and very special production of Company has been recorded for everyone to listen to for years to come – to be the first ever female Bobbie on stage and for that to be captured on a cast recording is a huge honour.”

“I wanted to record this album from the moment I heard about Marianne Elliott’s vision for Bobbie’s gender role change and very current narrative coming to life in this new production. There are so many favourite songs for Sondheim fans that take on new meaning and a wonderful freshness on this cast recording, and we’re very proud to be releasing it for the world to enjoy,” stated Kevin Gore, President of Arts Music for Warner Music Group.

'Look anyone will tell you, I’m a pretty straight sort of guy.' Tony Blair A reckless reappraisal of the life of former Ugly Rumours front man and … END_OF_DOCUMENT_TOKEN_TO_BE_REPLACED

Michael Harrison and the Really Useful Group are thrilled to announce that The Wizard of Oz, the musical based on the iconic story by L. Frank Baum, … END_OF_DOCUMENT_TOKEN_TO_BE_REPLACED

Following major demand for tickets, the Queen of comedy Dawn French has announced a host of new UK tour dates for her critically acclaimed live … END_OF_DOCUMENT_TOKEN_TO_BE_REPLACED