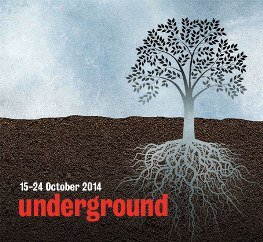 An audience of 60 decide the fate of a brand new nation, in this interactive experience by one of the UK’s most enigmatic theatre companies.

The audience takes the role of the last surviving members of a society ravaged by war, in this interactive work inspired by the 2011 UK riots, the Arab spring, Iceland’s crowd-sourced constitution and the rise (and fall) of Occupy. With the rules of a new society in their hands, the audience must decide on how they will run their new nation and how to avoid the mistakes of the past, exploring – with free rein – the possibilities of nationhood and democracy.

The work previews at KCL as part of the Arts and Humanities Festival 2014: underground before a run at Oval House this November marking the start of Parliament Week 2014. It has been through several stages of development through which Coney tested and researched game mechanics, economic systems and narrative alongside political models and how to fully engage a playing audience. The process has been supported by a host of both academic institutes and arts organisations, with partners including Birkbeck University, the Cultural Institute at Kings College London, National Theatre Wales, BAC, and Warwick Arts Centre.

Co-creator and director Annette Mees said: “We’ve been really excited by the shift in the last few years. Ten years ago, voting numbers were going down. Last year, there was a resurgence of active citizenship across the world: politics outside of the political system such as Occupy and the Indignado protests. The public disaffection with mainstream politics has created a strong resurgence in grassroots activism. We were keen to give people a taste of what it’s like to make difficult decisions, to activate their sense of what they want in a bigger society and for them to think about who they want to be led by. We’re not providing answers but we are creating a space to think about these issues, of course with an eye on the upcoming 2015 General Election.”

About Coney
Coney are interactive theatre-makers, who weave together theatre and game design to create dynamic shows and experiences in a wide variety of settings; theatres, schools, museums, on the streets and online. ‘Guided by principles of curiosity, adventure and loveliness, the company, run by co-directors Annette Mees, Tassos Stevens, Tom Bowtell, place audiences at the heart of their work, co-creating performances within the stories and worlds designed by the company. Previous work by the company includes NTT (National Theatre, 2006), The Gold-Bug (BAC, 2008), A Small Town Anywhere (BAC, 2009) and House of Cards (State Apartments at Kensington Palace, 2012).