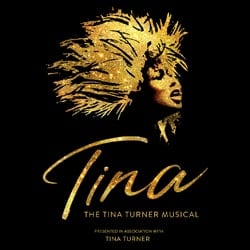 Stage Entertainment are pleased to confirm that TINA, a new musical based on the life of legendary artist Tina Turner, will open at the Aldwych Theatre in April 2018. The Tina Turner Musical London performances will begin on 21st March 2018 with press night on 17th April 2018. TINA is initially booking to 16th June 2018.

Tina Turner said: “I am so excited to be bringing my musical to the West End! London is a place that means so much to me and had such a big impact on my music and my life. Returning now to tell my full story, in the city I love, feels like an important chapter and is truly exciting.”

Written by Katori Hall with Frank Ketelaar and Kees Prins and directed by Phyllida Lloyd, with choreography by Anthony van Laast, set and costume designs are by Mark Thompson, musical supervision by Nicholas Skilbeck, lighting by Bruno Poet sound by Nevin Steinberg and orchestrations by Ethan Popp. Casting for TINA will be announced in due course.

With a career that has spanned more than half a century, the legendary rock performer Tina Turner is one of the world’s best-selling artists of all time. She first rose to fame in the 1960s partnering with her then-husband Ike Turner, achieving great acclaim for their live performances and catalogue of hits. Later, Turner enjoyed an international solo career with her 1984 album Private Dancer earning her widespread recognition and numerous awards, including three Grammys. She went on to deliver more chart-topping albums and hits, receiving a further eight Grammy Awards and reportedly selling more concert tickets than any other solo performer in history. The revered singer was introduced into the Rock and Roll Hall of Fame in 1991 and has often been voted as one of the most successful female Rock ‘n’ Roll artists of all time.

Katori Hall is a writer and performer from Memphis, Tennessee. In 2016, her play Children of Killers was performed as part of the National Theatre’s Connections Festival. Her play The Mountaintop, premiering at Theatre503 in 2009, received a transfer to Trafalgar Studios and became the winner of the 2010 Olivier Award for Best New Play, and following the West End run the play opened on Broadway in October 2011 starring Samuel L Jackson and Angela Bassett. Hall’s other writing includes the award-winning Hurt Village currently in development for a feature film, Hoodoo Love, Remembrance, Saturday Night/Sunday Morning, WHADDABLOODCLOT!!!, Our Lady of Kibeho, Pussy Valley and The Blood Quilt. Earlier this month Hall was named Artistic Director of the Hattiloo Theatre in Memphis.

Phyllida Lloyd returns to the West End where she has previously directed the world premiere of MAMMA MIA!, currently still running in London after 18 years. Her production subsequently opened on Broadway and worldwide becoming a global phenomenon before she directed a film version for Universal Pictures. More recently she has directed a Shakespeare Trilogy for the Donmar at King’s Cross – Henry IV, Julius Caesar and The Tempest, all of which were also seen in New York where she has previously directed Taming of the Shrew at the Public Theatre and Josephine and I at Joe’s Pub at The Public, a transfer from The Bush. Previously for the Donmar Warehouse she directed Mary Stuart which transferred to the Apollo Theatre and then Broadway, The Threepenny Opera and Boston Marriage. She directed Six Degrees of Separation, Hysteria and Wild East all for the Royal Court, The Rime of the Ancient Mariner with Fiona Shaw at the Old Vic Tunnels, Brooklyn Academy of Music and Epidaurus, The Way of the World, Pericles, What the Butler Saw, The Prime of Miss Jean Brodie and The Duchess of Malfi all for the National Theatre, Artists and Admirers and The Virtuoso for the Royal Shakespeare Company. Her other film credits include The Iron Lady, starring Meryl Streep in the role of Margaret Thatcher, and Gloriana. Lloyd has directed many productions for the Royal Opera House and English National Opera and as well as winning multiple awards for her work, in 2012 she was awarded a CBE.

Anthony van Laast’s credits include Sister Act, Hair and Side Show as well as Disney’s recent film Beauty and the Beast. Mark Thompson’s extensive design credits include Art, Bombay Dreams, One Man Two Guvnors and Charlie and the Chocolate Factory. Nicholas Skilbeck’s credits include Charlie and the Chocolate Factory and Gypsy and Follies at the National Theatre. Bruno Poet has worked with the National Theatre on multiple productions including Light Shining in Buckinghamshire, Treasure Island and Frankenstein. His most recent credit was with Akhnaten with the Los Angeles Opera. Nevin Steinberg has worked on some of the biggest shows currently on Broadway including Dear Evan Hansen and Hamilton, with his most recent theatre credit being Bandstand. Ethan Popp is currently serving as Music Supervisor and Arranger to the West End production of Motown The Musical and is Music Supervisor for Andrew Lloyd Webber’s School of Rock – The Musical on Broadway.

Thompson, van Laast and Skilbeck all collaborated with Lloyd on the world premiere of her production of MAMMA MIA!

Cirque du Soleil has announced the London run for one of its most critically acclaimed touring show KURIOS— Cabinet of Curiosities. Opening on 13th … END_OF_DOCUMENT_TOKEN_TO_BE_REPLACED

Ambassador Theatre Group Productions are delighted to announce a UK and Ireland Tour of the pantomime MOTHER GOOSE. The first of its kind to tour the … END_OF_DOCUMENT_TOKEN_TO_BE_REPLACED

The National Theatre’s new musical Hex returns to the Olivier theatre for Christmas, after its original 2021 opening was delayed due to covid. The … END_OF_DOCUMENT_TOKEN_TO_BE_REPLACED