“An epic exploration of the life of Mark DeFriest and the injustices that he has faced as well as the poor treatment of mentally ill and vulnerable prisoners in the USA. This play is like no other you have seen, challenging form and using physical theatre, music, text and more to re tell this infuriating true story. Mark has been nicknamed ‘Prison Houdini’ after attempting an escape 13 times (7 successful) Playwright Aaron-Lee Eyles has been in contact with DeFriest and includes verbatim from his letters in the text, in order to tell this story as authentically as possible.” 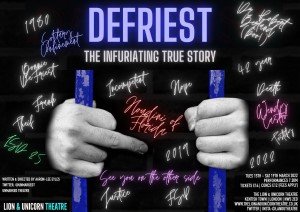 DEFRIEST is at the Lion and Unicorn Theatre between 15-19th March 2022.

When did you decide that Mark DeFriest’s story should be brought to the stage?
AE “It was 2020, I just happened to be scrolling through videos on Facebook when I saw a video of one of Mark’s most cunning and interesting escape attempts, this propelled me into researching further and the more I found out about how Mark has been treated and his life inside prison the more wrapped up in the story I became, it’s incredible how little people know about this story and that is one of the reasons why I wanted to play my part in telling it.”

What was the process that you went through in getting this to the stage?
AE “The original production all happened very quickly, I already had a slot at the Bread and Roses Theatre and was going to be doing a completely different play there. But once I had discovered Mark’s story I knew it needed to be on stage. In preparation for performing at The Lion and Unicorn, there has been a lot of research and I’ve even spoken to Mark personally through letters.”

What is at the heart of Mark DeFriest’s story?
WB: “Mark DeFriest’s story is about the failure of an entire system is supposed to punish criminals for their wrong doings but instead have failed someone who is mentally ill. Instead of trying to find out the cause of Mark’s behaviour and help him the entire system punished him and subjected him to torture that truly tested his humanity”

JO: “At the heart of Mark’s story is the idea of what it means to be “thrown away”, or discarded, as a person. Mark has been stripped of his humanity, or any shot at justice – all for being who he is, for not complying with the American model of “mental health”. This is a comment on the American judicial system; and how we in many ways punish mental illness for simply existing. But it’s also a story about defying that – staying strong and never giving up, even in horrible conditions.”

What were you looking for in an actor that could play the main role?
AE “Firstly I was looking for someone that could embody the absurdity of the play but also bring humanity and care to Mark as a character. From the first moment we saw Jay in his audition it was clear that he is a great fit for this role. Jay has also really grown into this character and gives a superbly versatile and unique performance.

What has your focus been on in terms of the set and lighting?
AE “The set for our plays always aims to be simple and undistracting. For DEFRIEST we just use two chairs and a table, we’re even contemplating if we really need the table! Lighting is a crucial part of storytelling, we really want to create pictures on the stage so vibrant lighting is crucial.”

What message are you wanting to get across with the production?
WB: “The message, in my opinion, is a retelling of the story through the lens of Mark and gives him the humanity and almost relatability that often gets lost when we talk about prisoners and criminals”

AE: “Exactly that. It would be difficult to say we’re trying to get across one moral message, it is more about telling the truth and raising awareness. Positive social change can only happen if we reflect and have difficult conversations.”

Jay O’Connell as ‘Mark’.
How challenging has the role been to create – given that it is a real person?
JO: “The way I see it, this is a challenge with two ways of looking at it. On the one hand, Mark is a real person: we have video evidence of what he’s like, his behaviours, and his testimonies – as an actor, I can make a model off who he already is and replicate that. But that’s its own challenge in itself, because there comes this huge responsibility along with it – to portray this person authentically, and to respect who they already are. It feels like, if I choose to take any dramatic freedoms with creating a character, I have to stop and ask: “is this accurate? Is this the right direction to go?” – it’s not restricting in any way, it’s just that normally, you can dive in and create something. I think that because Mark’s story revolves so much around how he has no say in what happens to him, and is consistently denied fair judgment, I feel a moral obligation to showcase who he really is – it doesn’t sit well with me to go against that.”

What have you focused on to get into character?
JO: “Because of the complexities of Mark’s character, what works best for me is trying to shift perspective. See the world through his eyes. About understanding everything that has happened in his life leading up to now has shaped him into who he is. I don’t want to go down the route of “showing” any mental health disorder, I don’t think it’s as simple as that. Mark sees the world in an extremely unique way – there are things we understand that he cannot comprehend, but also, he sees things in ways we couldn’t even imagine. Trying to connect the dots, figuring out “oh that’s why that is like that”; knowing how he might react in different situations.”

How have rehearsals been for you and the cast?
WB: “Rehearsals have been fun, we’ve really gelled well together and are exploring how to convey this truthful and deep story in a way that makes it enjoyable to watch”

JO: “Rehearsals have been going great! The team on this production is a dream to work with. Everyone brings a different point of view and different energy to the table – and it feels like a real collaborative process, that we’re all joining together in pursuit of telling Mark’s story – which I think is so important for one like this.”
And…

Why should theatregoers get along to see DEFRIEST?
AE: “People should come and watch this play firstly because it is an authentic and true story. Fiction is fantastic but a true story is something else. Especially one like this where the tragedy and absurdity of it are there and don’t need any dramatization. We (Unmarked Theatre) are now beginning to become known for experimenting with form and this show, in particular, has been pointed out for being all of Brecht Worshipping, Kafkaesque and Artiudian in places. So, it is certainly a refreshing and entertaining watch.”

WB: “You need to go and see DEFRIEST because you need to experience firsthand the madness and trauma that Mark has been facing his entire life from the age of 19 until now 61 and to have your mind changed and thoughts challenged on sentencing and the judicial system”

JO: “Come along to see DEFRIEST because the events that unfold are crazy!! it’s hard to believe this is a true story sometimes. It’s fun, it’s wild, whacky, it’s heart-breaking, it’s endearing. It’s not your typical piece of theatre and it’s not something you’ll forget in a hurry.”

DEFRIEST at The Lion and Unicorn theatre 15-19th March
https://www.thelionandunicorntheatre.com/

Andrew Lloyd Webber’s The Phantom of the Opera has returned to its home, Her Majesty’s Theatre London. Experience the thrill of the West End’s most … END_OF_DOCUMENT_TOKEN_TO_BE_REPLACED

The full cast is announced today for the 40th Anniversary tour of Michael Frayn’s multi-award-winning farce, Noises Off, which will open at Theatre … END_OF_DOCUMENT_TOKEN_TO_BE_REPLACED

Adapted from Susan Hill’s classic book, The Woman in Black at the Fortune Theatre has been thrilling London audiences since 1989. In The Woman … END_OF_DOCUMENT_TOKEN_TO_BE_REPLACED

The producers of the multi-award-winning, critically acclaimed production of CABARET at the KIT KAT CLUB in London’s West End are thrilled to announce … END_OF_DOCUMENT_TOKEN_TO_BE_REPLACED