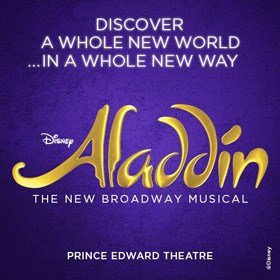 Disney does not do things by halves: even their press launches are slick and polished, with every projection in place as it should be and not a single typo in any of the promotional material. The attention to detail is phenomenal as Thomas Schumacher, President of the Disney Theatrical Group (just one division of the huge Walt Disney Company) explains in an appropriately animated fashion quite what was involved to get Aladdin to the Prince Edward Theatre, where previews for this highly anticipated musical start on Friday 27th May, with press night (or ‘premiere’ to use the Disney term) on Wednesday 15th June, 2016.

Perhaps they wanted to ease us in gently by bringing out Dean John-Wilson, who will play the title role, and Jade Ewen, who will pay Jasmine, to perform the first of three numbers at this press launch, the inevitable ‘A Whole New World’. To have left this tune out of this musical adaptation is beyond even the almost infinite imagination of Disney; of the two other tunes, one demonstrates poignancy in a twenty-something Aladdin wanting to please his mother to the point that she is ‘proud’ of him (whatever that means). The other, ‘Friend Like Me’, sung by Trevor Dion Nicholas, who transfers to the West End from the Broadway production and will play the Genie, is one of those all-singing all-dancing numbers that is bound to be all the more uplifting once it’s seen in its full glory and splendour, with the rest of the company and all the lighting effects and full band playing.

There are, apparently, 337 costumes in this show, based on 136 individual designs. Added to this, there are over 150 pairs of custom-made shoes that have either been made or are still in production, by shoemakers across the British Isles. As well as taking into account the dance moves involved, a typical high-street stiletto heel will, it is asserted, damage the stage before long, so there are wider heels made up. Of particular note was one costume, worn during a scene in ‘the palace’, on which in excess of 17,000 sequins, beads and crystals have been hand-stitched.

In one scene, there are over 100 costume changes that take place in less than a minute. To witness this you’ll need to look out for a scene where hundreds of people appear to be passing through. In fact, it is the same cast over and over again, dressed differently each time. Backstage is therefore as meticulously choreographed as on stage itself.

How do they make the magic carpet magical, or even float off the ground at all? And how exactly do the three costume changes that happen in less than one second actually happen? I can’t supply an answer.

I’ve not been sworn to secrecy, as though this were the ending of The Mousetrap: the creatives simply wouldn’t reveal anything, except to say that the actual technique of raising the magic carpet is remarkably simplistic and is over a century old.

Bob Crowley, who has designed sets for, amongst other shows, Skylight, The Audience, Once and The History Boys, discussed with Schumacher a plethora of projected stills, each showing a different scene in the show. Here, too, no expense has been spared, and I won’t attempt to describe them here – they really do have to be seen to be believed.

As well as going for their usual pre-teen market, Disney are targeting people in their thirties who were enthralled by the Disney movie, released in 1992. There does genuinely seem to be something quite grown-up about Aladdin: there’s an overture, and tunes that hark back to musical theatre of old. And as one attendee put it, it’s the new show that’s so good it even has an interval. It has been highly praised over on Broadway, and based on the information we were kindly supplied in this most pleasant of presentations, we’re in for a real treat in London too. It would seem that to get the full benefit of this production, you’ll need to pay close attention throughout, something that won’t be difficult given the music, costumes, sets and special effects. But it’s as fast-paced as it needs to be to dazzle a twenty-first century cultured audience – parts of it will be a case of ‘blink and you’ll miss it’. As ‘A Whole New World’ puts it: “Don’t you dare close your eyes.” Chris Omaweng

Aladdin
Brought to theatrical life by a legendary creative team, Disney’s new Broadway musical ALADDIN will sweep you into a world filled with beauty, comedy and breath-taking spectacle when it opens at the Prince Edward Theatre, London, in June 2016.

From Disney Theatrical Productions, the producer of The Lion King, Aladdin features the popular songs from the 1992 animated film together with new music written by Tony, Olivier and eight-time Academy Award® winner Alan Menken (Beauty and the Beast, Newsies, Little Shop Of Horrors). With lyrics from Olivier Award and two-time Oscar® winner Howard Ashman (Beauty and the Beast, The Little Mermaid), three-time Tony and Olivier Award, three-time Oscar winner Tim Rice (Evita, Aida), and four-time Tony Award nominee Chad Beguelin (The Wedding Singer), and a book by Beguelin, Aladdin is directed and choreographed by Tony and Olivier Award winner Casey Nicholaw (The Book of Mormon).