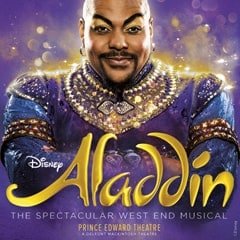 The Autism-Friendly Performance of ALADDIN is specially designed to make the West End production more accessible to autistic people. Disney Theatrical Productions will work closely with The National Autistic Society, the UK’s leading charity for autistic people and their families, to deliver the performance.

Autism is a lifelong developmental disability that affects how people perceive the world and interact with others. There are around 700,000 autistic people in the UK. Although everyone on the autism spectrum is different, people may be under or oversensitive to sounds, touch, tastes, smells, light or colours, which can make everyday life extremely challenging. They can also find social situations and unexpected changes a challenge, which can sometimes lead to extreme levels of anxiety.

Nancy Shakerley, Development and Education Manager for Disney Theatrical Group, said: “We understand that Autism-Friendly Performances can make theatregoing a more accessible and relaxed experience for people with autism as well as their family and friends.

Building on the success of the last three Autism-Friendly Performances at The Lion King, we are thrilled to continue our partnership with the National Autistic Society in holding our first Autism Friendly Performance at Aladdin this summer, just one year after opening in the West End.”

Daniel Cadey, Autism Access Development Manager at the National Autistic Society, said: “We were delighted to be offered the opportunity to work with Disney Theatrical Productions and the Prince Edward Theatre on this hugely successful show.”

“There are around 700,000 autistic people in the UK, and many struggle to cope with unfamiliar places and everyday sights and sounds which others are able to filter out, such as artificial lighting, background music or traffic noise.”

“Autistic people and their families tell us that they would love to visit the theatre, but because of sensory issues and anxiety in unfamiliar surroundings, they are prevented from doing so. Aladdin’s production team have taken great care in adapting the show, including having a ‘visual story’ online which can help autistic people prepare for their visit in advance. This means that for some of the audience on 29 August, this will be the very first time that they are able to experience the thrill of a live performance.”

These dedicated Autism-Friendly Performances of ALADDIN include modifications to the booking process, performance and the theatre environment, including:

Audience members can find out more information and purchase tickets at http://www.aladdinthemusical.co.uk/autismfriendly. Tickets are sold at a specially reduced rate and can be selected on a virtual map of the auditorium.

Now in its third record-breaking year on Broadway at the New Amsterdam Theatre, where it has been seen by more than 1.5 million people, ALADDIN’s global presence has grown to five productions on three continents. The show is now playing at Tokyo’s Dentsu Shiki Theatre Umi, Stage Theatre Neue Flora in Hamburg and Capitol Theatre in Sydney, ahead of moving to Her Majesty’s Theatre, Melbourne in April 2017.

Dean John-Wilson plays the role of Aladdin alongside Jade Ewen as Jasmine in the new musical based on the classic Academy Award®-winning animated film. Broadway cast member Trevor Dion NicholasLondon stage debut as Genie and is joined by Don Gallagher as Jafar, Peter Howe as Iago, Irvine Iqbal as the Sultan, Nathan Amzi as Babkak, Stephen Rahman-Hughes as Kassim and Rachid Sabitri as Omar.

Selladoor Worldwide is delighted to cheer on the full cast of BRING IT ON THE MUSICAL, who will be joining musical theatre and TV star Amber Davies as … END_OF_DOCUMENT_TOKEN_TO_BE_REPLACED

Following two critically acclaimed tours and huge popular demand, Footloose The Musical is back and better than ever! The musical which was postponed … END_OF_DOCUMENT_TOKEN_TO_BE_REPLACED

Producers Playful Productions and the Royal Shakespeare Company have announced initial casting for The Mirror and the Light in the West End. The third … END_OF_DOCUMENT_TOKEN_TO_BE_REPLACED