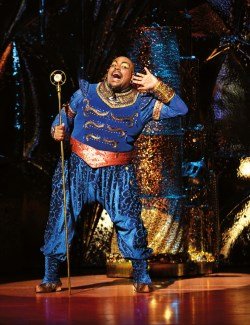 Disney’s hit West End musical Aladdin has launched a brand new video library to accompany its education programme. Nine short films have been made in consultation with teachers in order to help pupils prepare for their theatre experience as well as deepen their knowledge and understanding of the processes involved in theatre making.

The new films will link to the curriculum in the following ways;

Theatre tickets are now available for education groups of 10+ with prices beginning at £19.50 and education workshops are £12.50 per pupil. For booking information please visit http://www.aladdineducation.co.uk/.

Now in its fifth record-breaking year on Broadway at the New Amsterdam Theatre, Aladdin’s global presence has grown to six productions on four continents, seen by more than 7.2 million people to date. The show opened at Tokyo’s Dentsu Shiki Theatre Umi in May 2015, had its European premiere in December 2015 at the Stage Theatre Neue Flora, Hamburg, began performances in August 2016 in Australia and launched its North American tour in Chicago in April 2017.

After creating the “absorbing and provocative” Version 2.0 and the “eminently lovable” Letters, Kashyap Raja returns to London with his new play Earth … END_OF_DOCUMENT_TOKEN_TO_BE_REPLACED