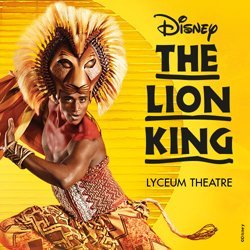 Disney’s THE LION KING is committed to creating a friendly and inclusive audience experience at the Lyceum Theatre, London. Having hosted its fifth Autism-Friendly Performance in London in June 2018, the landmark musical is delighted to be presenting a Relaxed Performance for 2019. Relaxed performances are specially adapted to be accessible to a wide range of audiences such as those with autism, those with a learning disability or anyone with a sensory predisposition, with extra trained staff on hand and dedicated quiet areas inside the theatre should anyone need to leave their seat. All patrons who feel this performance might suit their specific needs are warmly encouraged to attend.

Disney’s award-winning musical THE LION KING is now in its 19th triumphant year at London’s Lyceum Theatre. Since the UK premiere in London on Tuesday 19th October 1999, THE LION KING has entertained over 15 million theatregoers and remains the West End’s best-selling stage production. It is currently the sixth longest-running West End musical of all time.

After sell-out runs at Hope Mill Theatre, Manchester, and The Park Theatre, London, in 2022, Maureen Lipman returns to the West End with a performance … END_OF_DOCUMENT_TOKEN_TO_BE_REPLACED

THE PHANTOM OF THE OPERA at Her Majesty’s Theatre today announces Jon Robyns as ‘The Phantom’ from Monday 3 April 2023, Holly-Anne Hull as ‘Christine … END_OF_DOCUMENT_TOKEN_TO_BE_REPLACED

2023 marks the 50th Anniversary of the legendary smash hit musical The Rocky Horror Show, as it continues to play a newly extended tour through 2023 … END_OF_DOCUMENT_TOKEN_TO_BE_REPLACED