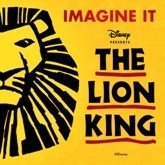 Auditions to be held in London on Sunday 16th March 2014

Open auditions are to be held for ‘Cub School’ – the programme where children who have the potential to play Young Simba and Young Nala in Disney’s musical THE LION KING have the opportunity to hone the skills required to take on these challenging roles.

‘Cub School’ is a free, fourteen-week performance-training programme from which the roles of Young Simba and Young Nala are cast. During the programme, children are trained in the disciplines of dance, voice and acting by teachers who are associated with THE LION KING.

The ‘Cub School’ auditions will take place on Sunday 16th March (registration from 10:30am) at Sylvia Young Theatre School in London.

Children are not required to prepare anything in advance of the audition for Cub School and must be accompanied by a parent or guardian. Applicants must be between ages 7 and 11 and below 148cm (4’8″) in height.

While winning a place in Cub School does not guarantee a part in the stage musical, it has proved to be excellent training for young people with the ambition to work on stage.

Disney’s award-winning musical THE LION KING is now in its 15th triumphant year at London’s Lyceum Theatre. Since the UK premiere in London on Tuesday 19th October 1999, the show has welcomed over 11 million guests and remains the West End’s best-selling stage production.

Winning over 70 theatre awards worldwide, THE LION KING follows the adventures of the young lion cub Simba, as he struggles to accept the responsibilities of adulthood and his destined role of King.

THE LION KING is produced by Disney Theatrical Productions.

THE LION KING
Lyceum Theatre
21 Wellington Street, London WC2E 7RQ
Tuesday to Saturday at 7.30pm
Matinees: Wednesday, Saturday and Sunday at 2.30pm.
There is no performance on a Monday evening.