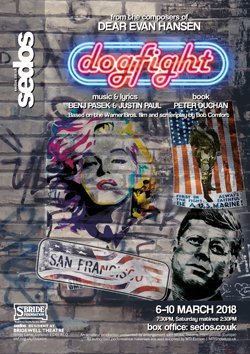 Sedos presents a new production of the award-winning musical Dogfight at the Bridewell Theatre, off Fleet Street, from 6th – 10th March 2018. The musical, which has Book by Peter Duchan and Music and Lyrics by Benj Pasek and Justin Paul, is based on the 1991 movie of the same name starring River Phoenix.

Before creating the Tony-winning sensation Dear Evan Hansen, Pasek and Paul delivered the heartbreaking and beautiful musical Dogfight, which premièred Off-Broadway in 2012, and won the Lucille Lortel Award for Outstanding Musical and was nominated for five Outer Critics Circle and one Drama Desk Awards in 2013.

Dogfight is set in San Francisco on November 21, 1963, on the eve of the Kennedy assassination. The majority of the show takes place in the final hours of an age of American innocence that will quickly dissipate. This innocence is depicted by a group of young Marines who set out for one final boys’ night of debauchery: booze, tattoos and the dogfight.

The rules of the dogfight are simple and cruel: each marine pays in $50, and the marine with the ugliest date wins. But, when one of these Marines, Eddie Birdlace, meets Rose, an awkward and idealistic waitress whom he invites to join him that night, she rewrites the rules of the game and teaches him the power of love and kindness.

Co-Directors Zoë Dobell and Peter Shimmin said: “The story of Dogfight is touching, shining a light on US Marines sent to fight the Vietnam War. They are young men, taught that they are invincible, that they will fight for American freedom, and return as heros. They leave America cocky as ever after arranging a cruel, objectifying game, hurting girls who would later become their only friends in the world. In this post-Weinstein world, it is crucial to highlight the dangers of a misogynistic mindset and the aura of toxic masculinity that affect so many people today.” This emotional journey depicts the blissful ignorance of youth, compassion in the face of cruelty and the ability to find true inner strength and acceptance despite the brutality of life and war.

Since 2012 Sedos has been the resident theatre company at the Bridewell Theatre.

After sell-out runs at Hope Mill Theatre, Manchester, and The Park Theatre, London, in 2022, Maureen Lipman returns to the West End with a performance … END_OF_DOCUMENT_TOKEN_TO_BE_REPLACED

THE PHANTOM OF THE OPERA at Her Majesty’s Theatre today announces Jon Robyns as ‘The Phantom’ from Monday 3 April 2023, Holly-Anne Hull as ‘Christine … END_OF_DOCUMENT_TOKEN_TO_BE_REPLACED

2023 marks the 50th Anniversary of the legendary smash hit musical The Rocky Horror Show, as it continues to play a newly extended tour through 2023 … END_OF_DOCUMENT_TOKEN_TO_BE_REPLACED

The producers of ROCK OF AGES are thrilled to announce full casting for the farewell tour of the production, starring Coronation Street star Kevin … END_OF_DOCUMENT_TOKEN_TO_BE_REPLACED