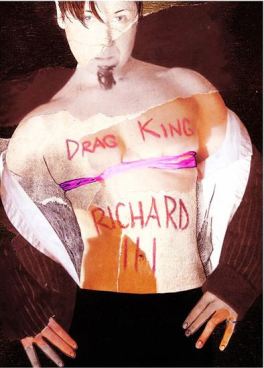 Following a highly acclaimed run at the Bristol Shakespeare Festival, Stance Theatre presents a powerful Richard III ahead of other summer blockbuster productions. Drag King Richard III explores the complexity of switching gender as lead character Laurie embarks on the challenging journey of transitioning from female to male.

Life in the wrong body is explored through Shakespeare’s deformed villain and the long term friendship Laurie has with La Femme – a butch lesbian who enjoys the trappings of femininity when opportunities arise. The play seamlessly weaves classical dialogue through contemporary text, and to stunning effect; the notorious seduction lines are quipped over a sexually charged Tango sequence.

Drag King Richard III is funny yet serious, probing but lighthearted, and offers some genuine laugh-out-loud moments while exposing the taboo of the transgender person. The issue has become highly topical with increased exposure in the media of trans people and their plight.

Actor Laverne Cox (Orange is the New Black) became the first trans woman to appear on the cover of Time Magazine. The gender-subverting photographer Del LaGrace Volcano, and acclaimed writer Laura Bridgeman (The Butch Monologues), will be in attendance for post-show discussions on the play and its ‘very big questions’ (The Stage).

Timely and relevant, Drag King Richard III takes its audiences on a spellbinding and thought-provoking journey ‘that no one can afford to miss’ (The Times), full of pathos and wit, as they follow Laurence’s struggle to transition at any cost. The play offers no easy answers, it enthrals and surprises while questioning one of the last social taboos of our modern age.