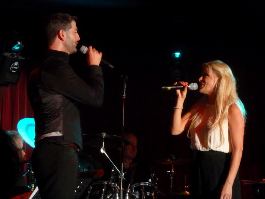 West End On Sea productions, the brain-child of Simon Pickering, has been running cabaret nights for just over a year in Brighton, but the last couple of days they have presented a new show called “Duets“, this time starring Oliver Tompsett and Rachael Wooding. Not only in Brighton, but also in London too.

Rachael and Oliver are popular for playing Scaramouch and Galileo for the final 18 months of We Will Rock You at the Dominion Theatre. So for many fans this was an opportunity not to be missed to see them as themselves. They did not disappoint.

Accompanied by a full band, Duets included many new songs arranged by Simon Pickering, who also played in the band.

The singing was not the only thing to enjoy in this cabaret, as the chemistry and banter between the two friends was very entertaining. The set list they chose included songs from musicals they had been in, some that they would like to be in, a little pop music, and not forgetting a classic 80s ballad.

The evening on both nights was hosted and compared by the lovely Lucy Pickering. The Proud Cabaret venues in both Brighton and London city are beautiful venues for this type of event.

There were lots of surprises on the evenings, including Oliver and Rachael singing “for good” from Wicked in the girls’ key. Oliver confessed his favourite musical, and one he would love to be in, which is The Full Monty, – and not because he wanted to get his “todger out” – his words. Without Love was unique, with Oliver and Rachael changing the lyrics to make for some very funny banter while singing. You really did have to be there.

Hopefully West End On Sea will bring a production to London City again – perhaps with other duets. Maybe Declan Bennet and Zrinka, from the original Once London cast – it would be good to see how they would play out their own cabaret.

Following its multiple West End runs, and continuing success at its home – The Other Palace, Heathers the Musical will embark on its highly … END_OF_DOCUMENT_TOKEN_TO_BE_REPLACED

After creating the “absorbing and provocative” Version 2.0 and the “eminently lovable” Letters, Kashyap Raja returns to London with his new play Earth … END_OF_DOCUMENT_TOKEN_TO_BE_REPLACED