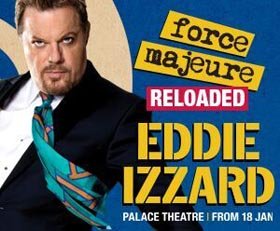 Derren Brown has been wowing London audiences over the Christmas period with performances of his new show, Miracle, at the Palace Theatre. The multi award-winning ‘master of psychological illusion ends his West End run on 16th January to continue with the 2016 leg of his UK Tour, but in return, the man who holds the unofficial comedy world record for his touring show is taking up residency at the theatre in his place.

Eddie Izzard performed in 28 countries (and in four languages) in his mammoth 2013/14 comedy tour of Force Majeure, and now nearly three years later, he is celebrating his achievement with a return to the West End stage as he plays a four-week residency of Force Majeure Reloaded at the Palace Theatre from 18th January to 20th February 2016.

Eddie Izzard is one of Britain’s best-loved stand-up comics, but he is also a man of many talents and his unique brand of ‘Izzardism comedy is just one of many arrows in his quiver. In the billing for the show he is referred to as a ‘comedian, actor, marathon runner and sometime escapologist’; if you asked a group of people, you’d find he is known to different people for different reasons. So just who is Eddie Izzard?

Edward John Izzard was born in Yemen in 1962, moving with his family to Northern Ireland the following year before relocating again to Wales, and then later East Sussex. As a young child, he suffered the loss of his mother to cancer and also began to identify himself as a transvestite.

He left university to pursue a career in comedy, cutting his teeth as a street performer in Covent Garden and with numerous stand-up gigs at various London comedy clubs before starting to gain widespread recognition in the early ‘90’s. His made his first West End appearance with Live at the Ambassadors in 1993, and has since risen to success through his subsequent live stage shows: Unrepeatable, Definite Article, Glorious, Dress to Kill, Circle, Sexie, Stripped, Live at Madison Square Garden, and of course, Force Majeure. His comedy style is a rambling surrealism that jumps from one topic to another, and is inspired in part by the Monty Python group with whom he actually performed on stage with fleetingly in their reunion show, Monty Python Live in Aspen.

Others may be more familiar with his work as an actor though, both on stage and on screen. He made his West End stage debut in this medium in the 1994 world premiere of David Mamet’s The Cryptogram, opposite Lindsay Duncan at the Comedy Theatre. He has also starred in 900 Oneonta, Edward II, Lenny, and most recently, played the role of Jack Lawson in the 2010 Broadway play Races. His most notable stage role was in the 2001 production of the Peter Nicols play, A Day in the Death of Joe Egg, at the Comedy Theatre, with him and fellow lead Victoria Hamilton reprising their roles on Broadway where they subsequently received Tony Award nominations for their performance.

On screen, he has appeared in such films as The Secret Agent, Velvet Goldmine, The Avengers, Ocean’s Twelve and Ocean’s Thirteen, My Super Ex-Girlfriend, Valkyrie, and many more.

Also included amongst his many achievements is the running of back-to-back marathons in July 2009, when with only five weeks training, he ran 43 marathons in 51 days to raise money for Sports Relief. In 2015, he also announced his intention to stand for election as an MP or to run for Mayor of London in 2020.

It doesn’t matter whether you know Eddie Izzard as a stand-up comedian, actor, political campaigner, charity fundraiser, or simply the man who sometimes likes to wear make-up and high heels on stage (and looks good in them as well). He excels at whatever he turns his hand to, and Force Majeure Reloaded is more than likely to be another hit for this incredibly talented and multi award-winning performer. I caught a little of the filmed performance of the original Force Majeure on TV the other day, and from what I saw then – including a return to the ‘Death or Cake’ canteen and a hilarious take on musical theatre that featured a song about a trouserless spider –, I for one cannot wait to get down to the Palace Theatre and see him do the full show. I expect to see many of you there too!