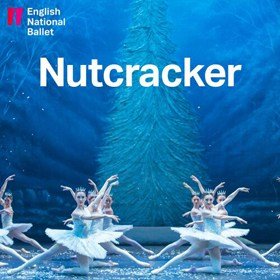 Following an immensely successful run in 2014 when more than 70,000 audience members made it part of their holiday celebrations, this version by Wayne Eagling marks English National Ballet’s 12th full length production of Nutcracker since first being performed in 1950, its founding year.

On a sparkling Christmas Eve in a frost-dusted Edwardian London, Clara and her enchanted Nutcracker doll discover a magical world, where she battles with the Mouse King and meets a handsome stranger. As the air grows colder, Clara and her valiant Nutcracker take a hot air balloon ride across London to the glistening Land of Snow where her adventure really begins.

In a world of Edwardian elegance, Nutcracker brings to life the popular Tchaikovsky score featuring the Dance of the Sugar Plum Fairy and Waltz of the Flowers.

This year, Nutcracker sees debuts from Cesar Corrales, Isaac Hernandez, and guest artist Osiel Gouneo in the role of the Nephew, and Emilio Pavan, and Jinhao Zhang in the role of Nutcracker.

Based on concept by Toer van Schayk and Wayne Eagling, Nutcracker has choreography by Wayne Eagling and music by Pyotr Ilyich Tchaikovsky, performed live by the English National Ballet Philharmonic, with design by Peter Farmer and lighting by David Richardson.

The Nutcracker – English National Ballet at the London Coliseum
St Martin’s Lane, London, WC2N 4ES
Running Time: 2 hours
Age Restrictions: Under 5s are not permitted, except for the matinee performance on the 4 & 10 January 2016.

Booking From: 16th Dec 2015
Booking Until: 9th Jan 2016
Important Info: Please note: 5 & 10 January 2016 matinee performance will be a child-friendly performance. Under 5s are not permitted to any other performance.

Bat Out of Hell The Musical Tickets London Coliseum