Disney and Cameron Mackintosh’s multi-award-winning musical Mary Poppins is flying back to the Prince Edward Theatre on 7th August 2021. 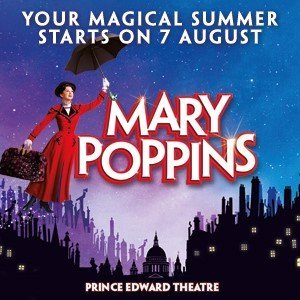 Starring Zizi Strallen in the title role and Charlie Stemp as Bert, the magical story of the world’s favourite Nanny is triumphantly and spectacularly brought to the stage with dazzling choreography, incredible effects and unforgettable songs.

Book tickets for this glorious production from £25!

MARY POPPINS is recommended for a general audience. As an advisory to adults who might bring young people, we recommend MARY POPPINS for ages 7 and up. Children under the age of 5 will not be admitted into the theatre. All persons aged 16 or under must be accompanied and sat next to the accompanying adult. They may not sit on their own within the auditorium. If children do have separate seats you could be refused entry. All persons entering the theatre, regardless of age, must have a ticket.

Obtaining Government-backed contingency insurance to protect against further unscheduled closures remains a priority. All plans for the re-opening of Mary Poppins are in accordance with the Government’s latest directives and therefore subject to change.

The global smash hit musical MAMMA MIA! will return to London’s West End at the Novello Theatre on 25 August 2021. Now in its 23rd year in London, … END_OF_DOCUMENT_TOKEN_TO_BE_REPLACED

Greetings, salutations and welcome to the West End 2021 class of Westerberg High. Leading the cast in the highly celebrated return of Heathers the … END_OF_DOCUMENT_TOKEN_TO_BE_REPLACED

THE PRINCE OF EGYPT, the hit musical based on the classic DreamWorks Animation film, is proud to confirm the complete cast, orchestra and company of … END_OF_DOCUMENT_TOKEN_TO_BE_REPLACED