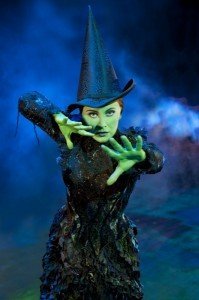 West End star Louise Dearman has procured quite a list of impressive theatre credits since graduating from Laine Theatre Arts in 1998. She has appeared in an array of West End and touring productions, such as Joseph and the Technicolor Dreamcoat (‘Narrator’, UK Tour), Jekyll and Hyde (‘Lucy Harris’, UK Tour), Evita (‘Eva’, UK Tour) Grease (‘Jan’, UK Tour and West End) and understudied the role of ‘Sarah Brown’ at the Piccadilly Theatre before taking over the role in the show’s touring production the following year. She has also released two albums: the musical theatre-themed You and I in 2005 and the pop-based cover album Her Comes The Sun in 2012. She is perhaps best known though for playing ‘Glinda the Good Witch’ in West End musical Wicked. Dearman replaced Diane Pilkington in the role in March 2010, playing opposite Rachel Tucker as Wicked Witch of the West ‘Elphaba’. Her departure from the show in December 2011 was met with much sorrow from the fans, but yesterday, they had reason to rejoice as Dearman made a triumphant return to the Apollo Victoria Theatre.

Wicked tells the ‘untold story’ of the Witches of Oz, who become unlikely friends until rivalries, their own beliefs and the perceptions of good vs wicked send them down different paths. The blonde curls of the spoilt, yet popular, ‘Glinda’ are long gone however, as Dearman has swapped her bubble for the broomstick of the green-skinned ‘Elphaba’, making history as the first actress to play the roles of both witches in Wicked. Highly regarded as one of the best ‘Glinda’s’ to appear in the West End show, it seems that fans and fellow stage performers alike are just as enthusiastic about her embracing her ‘wicked’ side. Twitter was last night filled with a seemingly never-ending stream of praising messages, gushing about her first ‘Elphaba’ performance. Here are just a small selection of them:

“Wicked history made tonight. @LouiseDearman is completely STUNNING as Elphaba just as she was as Glinda! Perfectly acted and insane vocals!” – @NathanJLodge

“Wow. You were incredible. Such an amazing start to your Elphaba run. No good deed blew the wind out of me.” – @DavidAlexMurray

“Biggest of congratulations to @LouiseDearman on a powerhouse first performance in Wicked. Very dark, aggressive and powerful. Very fresh.” – @WJConnolly

“WOW miss Elphie, if that’s your first show what on earth is the next year gonna bring well done! You were incredible!” – @SianLouise_xx

“@LouiseDearman makes me feel like I’m somebody wonderful. That voice. God.” – @chelseacullern

“Bravo @LouiseDearman. The whole audience was cheering for you – a powerful performance; the highlight, No Good Deed – outstanding.” – @Knockhardy

When the news of Dearman’s return was first announced, she commented that: “As an actress, you strive to challenge yourself to play as many diverse roles as possible throughout your career.” She knows the show well: she spent almost two years in the shoes of ‘Glinda’, the shallow girl with the beautiful face who receives the adoration of everyone around her, but now, she is taking on the burden of ‘Elphaba’, the impassioned girl whose green face and magical talents see her reviled and cast out from ‘acceptable’ society. In the leap from Good Witch to Wicked Witch, she is certainly facing a challenge, but one which it looks as though she will more than rise to.

The National Theatre’s new musical Hex returns to the Olivier theatre for Christmas, after its original 2021 opening was delayed due to covid. The … END_OF_DOCUMENT_TOKEN_TO_BE_REPLACED

As it celebrates its 8th anniversary in the West End, The Play That Goes Wrong, the Olivier Award-winning smash hit announces an extension to the … END_OF_DOCUMENT_TOKEN_TO_BE_REPLACED

Producer Josh Andrews has today announced the lead cast for the UK tour of Peter James’ Wish You Were Dead: George Rainsford, will star as James’ … END_OF_DOCUMENT_TOKEN_TO_BE_REPLACED

MAMMA MIA! THE PARTY, London’s premier dining experience, is delighted to announce the new cast arriving at Nikos Taverna on the Greek island of … END_OF_DOCUMENT_TOKEN_TO_BE_REPLACED

Perform Productions is delighted to announce the cast and creative team for the West End premiere of Magical Merlin this October half-term. The … END_OF_DOCUMENT_TOKEN_TO_BE_REPLACED