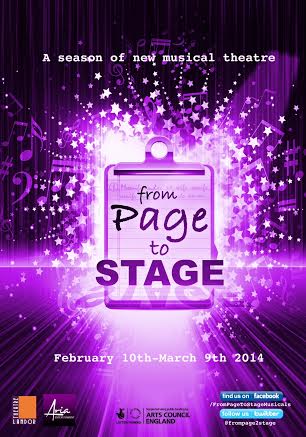 Katy Lipson of Aria Entertainment and Robert McWhir of The Landor Theatre are pleased to announce the full programme of work for the second annual From Page To Stage Festival, a season of new musical theatre at the Landor Theatre from Monday 10th February to Sunday 9th March 2014.

From Page To Stage is a season of new musical theatre devoted to the showcasing of work in development to an audience, to collect feedback and produce new opportunities for the artistes involved. The 2014 season was chosen from an open application process which saw 120 musicals submitted, and presents a mixed programme of work at various stages of development from rehearsed readings to fully staged productions, together with a selection of platform and scratch events aimed at prompting discussion about the future of musical theatre on a local, national and international level.

After the success of last year’s inaugural festival, From Page To Stage has also been awarded an Arts Council grant to support the 2014 programme of work.

The 2014 season will feature two fully staged productions, presenting the UK Premieres of a British and an American musical in week-long runs:

BEFORE THE NIGHT IS THROUGH
TUESDAY 15 TO SUNDAY 23 FEBRUARY 2014
Before the Night is Through is a brand new British musical with Book and Lyrics by Olivia Thompson and Music by Chris Whitehead.
November 1935.  Honey Quenelle, England’s biggest movie star is hosting a lavish party to celebrate her birthday, at her remote home on Lost Crow Island. The champagne is chilling, the glamorous guests are ready for an unforgettable night and reliable butler, Hugo is on hand to make sure the evening goes without a hitch. But when catering fails to arrive, news filters through of an escaped inmate at Beningford asylum, and Gaylord, the gerbil escapes from the soup tureen, events take a nasty turn.  Who is about to meet their maker?  Who cannot escape from their past?  And who will be brave enough to sample Mabel’s devilled prunes before the night is through….

THE MISTRESS CYCLE
TUESDAY 4 TO SUNDAY 9 MARCH 2014
The Mistress Cycle is a new American musical with Book and Lyrics by Beth Blatt and Music by Jenny Giering.
Mistress: a woman who illicitly occupies the place of wife – practically speaking, anyone who comes second. Jezebel, Siren, Vixen, Enchantress, Adulteress.
A musical tale of sacrifice, destruction and renewal, The Mistress Cycle is the story of Tess, a struggling 30-something photographer living in Manhattan, who is made an offer by a wealthy, older man to “keep her” as his mistress. As she wrestles with his proposition, Mistresses from different eras and cultures come to tell their stories and share their points-of-view: Ching, a 14-year-old concubine from 12th century China; Diane de Poitiers, the mistress of Henri II in France in the 1500’s; Lulu White, a bordello Madame in turn-of-the-last-century New Orleans; and Anais Nin, the famous diarist and infamous sexual adventuress. By the end of the show, Tess has learned so much about these women, about mistresshood, about herself – and has made her decision.
Three musicals will be showcased in the form of a rehearsed reading:

MERMAN’S APPRENTICE
TUESDAY 11 AND WEDNESDAY 12 FEBRUARY 2014
A new musical with Book and Lyrics by Stephen Cole and Music by David Evans
1970. The Golden Age of Musical Theatre is drawing to an end. But twelve-year-old Muriel Plakenstein doesn’t know that. So she runs away from home to become a Broadway star, and meets the Queen of Broadway Ethel Merman, who takes her to a Hello, Dolly! rehearsal where they sing together. When legendary producer David Merrick hears the kid, he decides to star Muriel in the first all-child cast of Dolly! Naturally, Merman takes her under wing to teach her the ropes of being a star…making little Muriel Plakenstein Merman’s Apprentice.

CLAUS THE MUSICAL
FRIDAY 14 AND SATURDAY 15 FEBRUARY 2014
A new musical with Book by Simon Warne Music and Lyrics by Andy Collyer.
How the Boy became a Man. How the Man became a Legend. Claus tells the incredible story of a human child brought up by immortals in a magical forest. But when Claus discovers there’s a whole world outside of the forest, inhabited by humans like him, his life takes a different path.

THE RETURN OF THE SOLDIER
FRIDAY 28 FEBRUARY AND SATURDAY 1 MARCH 2014
A new musical with Book and Lyrics by Tim Sanders and Music by Charles Miller.
Coinciding with the centenary of the First World War, The Return of the Soldier is a new musical adaptation of Rebecca West’s remarkable 1918 novella of the home front. An intensely bitter-sweet tale dissects the very different love of three women for one man. When Christopher returns from the war, shell-shocked, there are profound consequences for each of them. With a cast of six, this powerful new drama with its rich and arresting score becomes an eloquent treatise on the nature of love, truth, memory and loss. In the end, only an extraordinary sacrifice will restore the fragile status quo.

The season is completed by a selection of platform events and scratch nights:
FROM PAGE TO STAGE – OPEN MIC SESSIONS
MONDAY 10 FEBRUARY 2014
A selection of writers will be invited to present their own material with some special guest performers.

FILM SCREENING: BIG SOCIETY THE MUSICAL
THURSDAY 13 FEBRUARY 2014
A Surreal and gritty musical set against the backdrop of the UK economic cuts. Big Society The Musical takes the action of austerity protest marches and the spectacle of a west end musical and weaves in a personal story of finding a voice. It is social politics set to music, hard hitting and authentic, lifted with the help of a little northern British humor.
Linda is a strong woman in her late 40s who works with young offenders. Facing unemployment and the pending closure of her Youth Centre, Linda thinks only of Connor, a defiant 14-year-old who has no one apart from her. Linda risks her relationship, her home and her reputation to help him. But as she fights for control, she realizes she has none. When no one hears you shout… Sing!
The film tells its story through 14 strong original musical numbers which range from hundreds of singing community members chanting down a street through to intimate and touching duets on a tall ship. The film embodies the everyday, from OAP’s singing on allotments to female impersonators in smokey cabaret clubs, this improvised piece provides a familiar and ‘real’ look at the big society.
The producers of Big Society The Musical, which will be screened in cinemas all over the world, will present a 40-minute preview of the film, followed by a Q&A session.

SCRATCH NIGHTS: THREE MUSICALS IN DEVELOPMENT
TUESDAY 25 TO THURSDAY 27 FEBRUARY 2014
These scratch nights will present 30-minute excerpts of 3 new musicals in development, performed by a repertory company of actors.
Katy Lipson said today: “’We are delighted to now confirm this year’s chosen work of 2 full scale musicals, 3 readings and 3 showcases amongst others and we are thrilled to have secured a Grant For The Arts in support of the work we are doing. From Page To Stage serves as a platform for new writing and supports not only the writers but our audiences too. We hope the season will establish a strong vehicle for the development of new musicals here in the UK and help secure partners for the future of some of the works included.”

Following on from the return of the critically-acclaimed, five-star production of Cyrano de Bergerac, The Jamie Lloyd Company brings Chekhov’s tale of … END_OF_DOCUMENT_TOKEN_TO_BE_REPLACED

THE PHANTOM OF THE OPERA at Her Majesty’s Theatre is delighted to announce that booking is extended to Saturday 4 March 2023, with a new performance … END_OF_DOCUMENT_TOKEN_TO_BE_REPLACED

Producer Runaway Entertainment is delighted to announce that the critically acclaimed, smash hit, supernatural thriller 2:22 - A Ghost Story will … END_OF_DOCUMENT_TOKEN_TO_BE_REPLACED