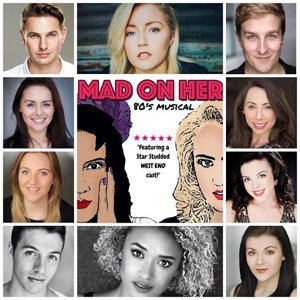 Mad On Her will embark on a UK Tour this July.
Joining the cast as the lead role Donna is Sarah Watson. Sarah appeared on ITV’s X Factor where she got to the Judges’ Houses, being mentored by Kelly Rowland. Sarah then joined the West End cast of Loserville (Garrick Theatre) and The Prodigals (Belgrade Theatre, Coventry)

From ITV’s Emmerdale is Kelsey Beth Crossley who will be playing the role of fun-loving nightclub owner Lynne. As well as playing the part of Scarlett Nicholls on ITV’s favourite farm, Kelsey made it through to battle-rounds on BBC’s The Voice.

This will mark actor Ashley Luke Lloyd’s directorial debut where he is co-producer on the show with Koryann Stevens for Lloyd and Stevens-Delves present.

Mad On Her heads to Liverpool Lantern theatre on the 14th of July, Whitehaven’s The Solway Hall (Lake District) on the 15th of July, Hope Mill Theatre in Manchester (SOLD OUT) on the 16th of July before heading to London’s off-west end theatre Upstairs at the Gatehouse in Highgate on the 17th of July. All tickets are £15, and can be booked via the website.
www.madonhermusical.com

Mad On Her – 80s Jukebox Musical takes you on a journey through all your favourite smash hits of this ‘Glamtastic’ decade. Get your Gladrags on and Glitter up as Donna and Tina party through the nightlife and drama of 1985.

Donna, ambitious and stylish, is climbing the ladder of success. Finding ‘Mr Right’ is the last thing on her mind – little does she know he could be just around the corner.
Tina, with her big hair and big heart, is the disco diva of the boulevard. As Donna’s best friend she sets out to play cupid.

Step into the nostalgia of the neon lights and
“Get ready to party the night away.”

Following its multiple West End runs, and continuing success at its home – The Other Palace, Heathers the Musical will embark on its highly … END_OF_DOCUMENT_TOKEN_TO_BE_REPLACED

After creating the “absorbing and provocative” Version 2.0 and the “eminently lovable” Letters, Kashyap Raja returns to London with his new play Earth … END_OF_DOCUMENT_TOKEN_TO_BE_REPLACED