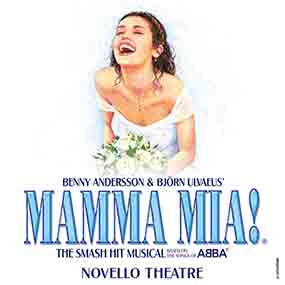 From West End to global phenomenon, MAMMA MIA! is Judy Craymer’s ingenious vision of staging the story-telling magic of ABBA’s timeless songs with an enchanting tale of family and friendship unfolding on a Greek island paradise. To date, it has been seen by over 60 million people in 50 productions in 16 different languages grossing more than $2 billion at the box office. In 2011, it became the first Western musical ever to be staged in Mandarin in the People’s Republic of China.

MAMMA MIA! is currently on its first ever UK Tour, receiving great critical and public acclaim. MAMMA MIA! originally opened in London at the Prince Edward Theatre on 6 April 1999, before transferring to the Prince of Wales Theatre in 2004. The musical re-opened at the Novello Theatre in 2012, where it recently celebrated its London 18th birthday on 6th April 2017.

The London production of MAMMA MIA! has been seen by nearly 8 million people, played over 7,500 performances and has broken box office records in all three of its London homes.

With music and lyrics by Benny Andersson and Björn Ulvaeus, MAMMA MIA! is written by Catherine Johnson, directed by Phyllida Lloyd and choreographed by Anthony Van Laast. The production is designed by Mark Thompson, with lighting design by Howard Harrison, sound design by Andrew Bruce and Bobby Aitken, and musical supervision, additional material & arrangements by Martin Koch.

Following its multiple West End runs, and continuing success at its home – The Other Palace, Heathers the Musical will embark on its highly … END_OF_DOCUMENT_TOKEN_TO_BE_REPLACED

After creating the “absorbing and provocative” Version 2.0 and the “eminently lovable” Letters, Kashyap Raja returns to London with his new play Earth … END_OF_DOCUMENT_TOKEN_TO_BE_REPLACED