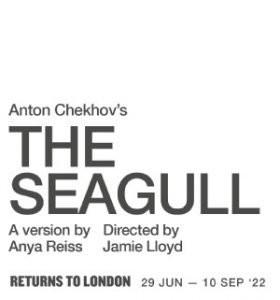 The Jamie Lloyd Company continues its commitment to accessibility with 12,000 £15 tickets offered across its 2022 UK productions (Cyrano de Bergerac and The Seagull), with an additional 5,000 free tickets for The Seagull available for those with limited access to the arts.

Throughout the run, there will be specific Monday evening and Wednesday matinee performances with £15 seats available across the house exclusively for under 30s, key workers and those receiving government benefits. These performances are:

Tickets will be available via thejamielloydcompany.com

Free Tickets
A dedicated outreach manager is distributing 5,000 free tickets amongst both secondary state schools and community organisations who otherwise would not have access to the theatre. Those working with a group who does not have the means or opportunity to visit the theatre, can register their interest here.

Anton Chekhov‘s
THE SEAGULL
A version by Anya Reiss

‘We need the theatre, couldn’t, couldn’t do without it. Could we?’
A young woman is desperate for fame and a way out. A young man is pining after the woman of his dreams. A successful writer longs for a sense of achievement. An actress wants to fight the changing of the times. In an isolated home in the countryside where dreams are in tatters, hopes dashed, hearts broken and there is nowhere left to turn, the only option is to turn on each other.

Daniel Monks plays Konstantin. His theatre credits include The Normal Heart (National Theatre), Teenage Dick (Donmar Warehouse – Winner of Best Performer in a Play at The Stage Debut Awards 2020), Lord of the Flies (Sydney Theatre Company) and The Real and Imagined History of The Elephant Man (Malthouse Theatre, Sydney – for which he was nominated for a Helpmann Award and Green Room Award for Best Lead Actor in a Play). For film, he wrote, produced, edited and starred in Pulse – which won the Busan Bank Award at the Busan International Film Festival 2017 and for which he was nominated for the Australian Academy Award (AACTA) for Best Lead Actor in a Film. He is an Ambassador for the Starlight Children’s Foundation, and in 2018, he was named the Ambassador for People with Disabilities Australia at the 40th Sydney Mardi Gras Parade.

Following its multiple West End runs, and continuing success at its home – The Other Palace, Heathers the Musical will embark on its highly … END_OF_DOCUMENT_TOKEN_TO_BE_REPLACED

After creating the “absorbing and provocative” Version 2.0 and the “eminently lovable” Letters, Kashyap Raja returns to London with his new play Earth … END_OF_DOCUMENT_TOKEN_TO_BE_REPLACED