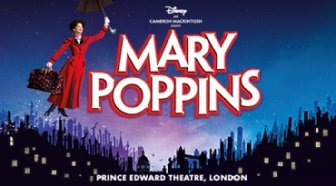 Cameron Mackintosh and Disney Theatrical Productions are delighted to announce final adult casting for the new production of Mary Poppins which begins rehearsals in September and returns to its original West End home at the Prince Edward Theatre from 23rd October 2019.

Joining Zizi Strallen in the title role, Charlie Stemp as Bert, Joseph Millson as George Banks and Petula Clark as the Bird Woman, are Amy Griffiths who will play Winifred Banks, Claire Moore as Miss Andrew, Claire Machin as Mrs Brill, Jack North as Robertson Ay and Barry James as Bank Chairman and Admiral Boom. Casting for the roles of Jane and Michael Banks will be announced at a later date.

The magical story of the world’s favourite Nanny arriving on Cherry Tree Lane has been triumphantly and spectacularly brought to the stage with dazzling choreography, incredible effects and unforgettable songs. The stage version of Mary Poppins, brilliantly adapted from the wonderful stories by PL Travers and the original beloved Walt Disney film, continues to be a smash hit around the world since its opening in London 15 years ago.

The original music and lyrics by Richard M. Sherman and Robert B. Sherman include the classic songs Jolly Holiday, Step in Time, Feed the Birds and Supercalifragilisticexpialidocious. New songs and additional music are by the Olivier award-winning British team of George Stiles and Anthony Drewe.

Book is by Academy Award®-winning screenwriter and Downton Abbey creator, Julian Fellowes and this production is co-created by Cameron Mackintosh. The producer for Disney Theatrical Productions is Thomas Schumacher.

The stage production of Mary Poppins originally opened in the West End in December 2004, running for over 1,250 performances. During this time, the production won two Olivier Awards and an Evening Standard Award. Subsequently the Tony Award®-winning Broadway production ran for over six years.

A subsequent new production of the show, adapted from the original, enjoyed record-breaking runs in Australia, North America, the UK and Ireland, New Zealand, Holland, Mexico, Austria, Switzerland, Dubai, Japan and Germany, where the production recently entered its second hit year in Hamburg. Mary Poppins is the biggest hit musical ever in Italy playing key seasons in Milan, and in October will open in Rome simultaneous with the London production. Several further new productions are to open in Europe over the next three years.

The Prince Edward opening in October will be the first time the new production will be seen in London.

After creating the “absorbing and provocative” Version 2.0 and the “eminently lovable” Letters, Kashyap Raja returns to London with his new play Earth … END_OF_DOCUMENT_TOKEN_TO_BE_REPLACED