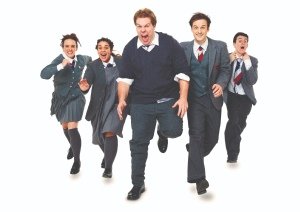 Mischief Theatre, the Olivier award-winning company behind The Play That Goes Wrong, today announces the full cast for their brand-new comedy Groan Ups, performing from 20 September until 1 December 2019 at the Vaudeville Theatre.

From the parents of The Play That Goes Wrong comes a brand-new comedy all about growing up.

Are we the same people at 30 as we were at 13? Does school life determine our future? Do we ever grow out of our school crush? Playing an unruly classroom of kids and anarchic high school teenagers, through to the aches and pains of adulthood, the original Mischief company are back in the West End with their first new play since 2016.

Groan Ups will launch Mischief Theatre’s residency at the Vaudeville Theatre and their programme of new work. The second production, Magic Goes Wrong, created with magic legends Penn & Teller, will preview from 14 December. Tickets for Groan Ups are on sale and can be purchased via nimaxtheatres.com and MischiefTheatre.co.uk.

Following on from the return of the critically-acclaimed, five-star production of Cyrano de Bergerac, The Jamie Lloyd Company brings Chekhov’s tale of … END_OF_DOCUMENT_TOKEN_TO_BE_REPLACED

THE PHANTOM OF THE OPERA at Her Majesty’s Theatre is delighted to announce that booking is extended to Saturday 4 March 2023, with a new performance … END_OF_DOCUMENT_TOKEN_TO_BE_REPLACED

Producer Runaway Entertainment is delighted to announce that the critically acclaimed, smash hit, supernatural thriller 2:22 - A Ghost Story will … END_OF_DOCUMENT_TOKEN_TO_BE_REPLACED