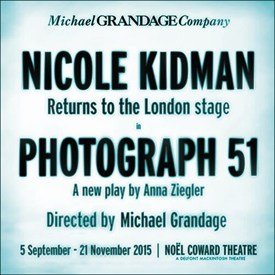 Photograph 51 also sees the return of Michael Grandage Company to the West End following their immensely successful season in 2013/14, also at the Noel Coward Theatre. The company is committed to reaching as wide an audience as possible through accessible ticket prices across their theatre work, and are offering over 20,000 tickets at £10 (including booking fee and restoration levy), which is 25% of the tickets for the entire run, across all levels of the auditorium. In addition, the company will stage access performances – with both captioned and audio described performances.

“The instant I saw the photograph my mouth fell open and my pulse began to race”
Does Rosalind Franklin know how precious her photograph is? In the race to unlock the secret of life it could be the one to hold the key. With rival scientists looking everywhere for the answer, who will be first to see it and more importantly, understand it? Anna Ziegler’s extraordinary play looks at the woman who cracked DNA and asks what is sacrificed in the pursuit of science, love and a place in history.

Nicole Kidman makes her hugely anticipated return to the London stage in the role of Rosalind Franklin, the woman who discovered the secret to Life, in the UK première of Anna Ziegler’s award-winning play. The production reunites Kidman and Grandage following their recent collaboration on the forthcoming feature film Genius.

Stephen Campbell Moore plays Maurice Wilkins. His theatre work includes Chimerica (Almeida Theatre and Harold Pinter Theatre), Berenice (Donmar Warehouse), Clybourne Park (Royal Court and Wyndham’s Theatre), All My Sons (Apollo Theatre), The History Boys (National Theatre and Broadway), Much Ado About Nothing and Anthony and Cleopatra (RSC), A Midsummer Night’s Dream (Albery Theatre), and Richard II and Coriolanus (Almeida at Gainsborough Studio). For television, his credits include Stag, The Wrong Mans, The Go Between, Our Zoo, Hunted, Just Henry, Titanic, Sleepyhead, Pulse, Ben Hur, Larkrise to Candleford, A Short Stay in Switzerland, Ashes to Ashes, Rough Crossings, Hustle, Wallis and Edward, He Knew He Was Right and Byron; and for film, The Lady in the Van, The Ones Below, Adam Jones, Moonwalkers, Man Up, Complicit, Johnny English Reborn, Season of the Witch, Sea Wolf, The Day, The Bank Job, Amazing Grace, The History Boys, A Good Woman and Bright Young Things.